Anthony Deion Branch, Jr. (born July 18, 1979) is an American football wide receiver for the New England Patriots of the National Football League (NFL). He was drafted by the Patriots in the second round of the 2002 NFL Draft. He played college football at Louisville.

He has also played for the Seattle Seahawks. Branch was named the Most Valuable Player of Super Bowl XXXIX on February 6, 2005, after tying former San Francisco 49ers wide receiver Jerry Rice and former Cincinnati Bengals tight end Dan Ross for the Super Bowl reception record with 11 catches for 133 yards. He was the first receiver to win the award since 1989.

Branch was born in Albany, Georgia. He attended Monroe Comprehensive High School in Albany, where he lettered in both football and track and field.

After graduating from high school, Branch attended Jones County Junior College in Ellisville, Mississippi, where he played football for two seasons. As a freshman in 1997, Branch caught 37 passes for 639 yards and five touchdowns, and also returned 14 kickoffs for a 23.6 yard average. In 1998, Branch had 70 receptions for 1,012 yards and nine touchdowns, while also returning 15 punts for a 12.8 yard average and 17 kickoffs for a 19.6 yard average. His sophomore performance earned him second-team All-American honors.

Branch played two seasons at the University of Louisville beginning in 2000. As a junior, Branch started ten games and led the team with 71 receptions for 1,016 yards and nine touchdowns. His 6.45 catches per game ranked six in the nation. He was named an All-Conference USA first-team selection in addition to being voted the Cardinals' Most Valuable Player and Outstanding Offensive Performer. As a senior in 2001, Branch again led the team in catches with 72, recording a conference-best 1,188 yards as well as nine touchdowns. He also returned 10 punts for 112 yards, including a 61-yard touchdown return. He was again named a first-team All-Conference USA selection following the season.

Branch was drafted by the Patriots in the second round (65th overall) of the 2002 NFL Draft. In his rookie season in 2002, Branch started 7 of 13 games played for the Patriots, missing the final three games of the regular season with a leg injury. He finished the season with 43 catches for 489 yards and two touchdowns, ranking him third on the team behind Troy Brown and David Patten. On special teams, Branch led the Patriots with 36 kickoff returns for 863 yards and added two punts returns for 58 yards. In Week 4 against the San Diego Chargers, Branch caught 13 passes, the second-highest single-game total by a rookie in NFL history.

In 2003, Branch started 11 of 15 games played for the Patriots, missing only the team's Week 6 game against the Tennessee Titans with an injury. He led the team with 57 catches for 803 yards, recording first downs on 40 of his receptions, 24 of which came on third down. In the Patriots' victory in Super Bowl XXXVIII over the Carolina Panthers, Branch caught 10 passes for 143 yards and a touchdown. His 17-yard catch on the final drive with seconds remaining set-up Adam Vinatieri's game-winning 41-yard field goal.

Branch returned in 2004 to start the Patriots' first two games of the season before suffering a leg injury in the first half of the team's Week 2 game against the Arizona Cardinals. He would not return until Week 11, starting every remaining game and finishing the regular season with 35 receptions for 454 yards and four touchdowns. Branch had a 60-yard touchdown catch in the Patriots' AFC Championship game win over the Pittsburgh Steelers, earning him NFL Offensive Player of Championship Sunday honors. Two weeks later, in Super Bowl XXXIX, Branch tied a Super Bowl record with 11 catches for 133 yards. He was named Super Bowl MVP, the first receiver to do so since 1989. The Patriots defeated the Philadelphia Eagles for Branch's second Super Bowl ring.

In 2005, Branch played in 16 games (15 starts) for the first time, setting career highs with 78 receptions for 998 yards and five touchdowns. In the Patriots' Divisional playoff loss to the Denver Broncos, Branch had 8 catches for 153 yards, including a former career-long catch of 73 yards. 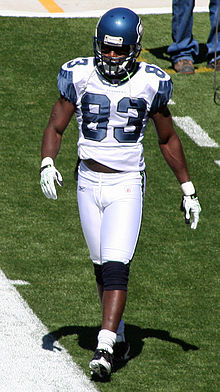 Branch during his tenure with the Seattle Seahawks

It was the last formal contract discussion between the two sides, leading Branch to hold out of the team's mandatory June minicamp, training camp, and the preseason.[1]

On August 25, 2006, the Patriots announced that Branch was given permission to seek a trade and negotiate a contract with other teams through September 1, 2006.[1] Both the Seattle Seahawks and New York Jets made trade offers to the Patriots, but neither trade was consummated before the September 1 deadline.[1] After the deadline passed, Branch filed two grievances against the Patriots with the NFL claiming the Patriots did not bargain in good faith and did not trade him after being offered a second-round selection by another team.[1]

Branch remained on the team's Reserve/Did Not Report list through the first week of the regular season. By not reporting, Branch was fined over $600,000 by the Patriots.[1]

On September 11, 2006, the Patriots traded Branch to the Seahawks for a first-round selection in the 2007 NFL Draft.[1] Branch subsequently signed a six-year, $39 million contract extension with the Seahawks.[1]

After being traded to Seattle, Branch played in the final 14 games of the season for the Seahawks in 2006, starting 13 of them. He finished the season ranked second on the team with 53 receptions for 725 yards and four touchdowns. He added 8 catches for 96 yards in the team's two playoff games.

Branch had 343 yards for the Seahawks in the first five games (all starts) of the 2007 season, before suffering a foot sprain and not returning until Week 11. He went on to start six more games before a strained right calf kept him out of the team's Week 17 game against the Atlanta Falcons and their Wild Card playoff win over the Washington Redskins.[3] He returned for the Seahawks' loss to the Green Bay Packers the next week but did not record a reception. He finished the regular season third on the team with 49 catches for 661 yards and four touchdowns.

In 2008, Branch missed eight of the first nine games to injury but started the team's other seven games. He finished the season fourth on the team with 30 catches for 412 yards and four touchdowns. He returned in 2009 to play in 14 games (five starts), recording 45 catches for 437 yards and two touchdowns.

Branch began his final season in Seattle in 2010 by starting three of the team's first four games, catching 13 passes for 112 yards and one touchdown.

Return to the Patriots

On October 11, 2010, Branch was traded back to the Patriots for a fourth-round selection in the 2011 NFL Draft.[4] The pick was to be the higher of the Patriots' 2011 fourth-round selections, their own pick or the Denver Broncos selection acquired in an earlier trade involving running back Laurence Maroney; the Broncos selection was higher. The move reunited Branch with former quarterback Tom Brady and came less than a week after the Patriots traded All-Pro receiver Randy Moss to the Minnesota Vikings for a third-round draft selection in the 2011 NFL Draft.