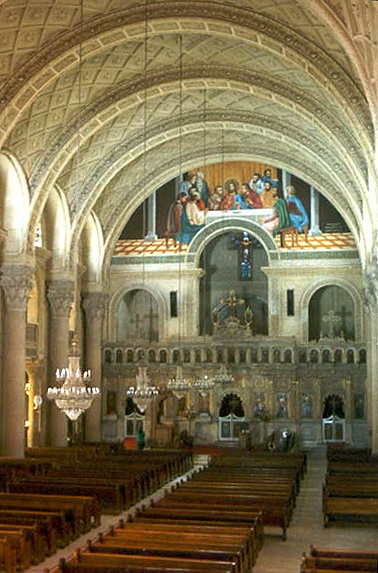 The cathedral is said to stand on the site of the church founded by St. in 60 AD.

St. (author of the second Gospel) has been connected with the city of since earliest Christian tradition. Coptic Christians believe he arrived in Alexandria around 60 AD and stayed for about seven years.

During this time, Mark converted many to and performed many miracles. He is considered the founder of the and the first . According to tradition, St. Mark was arrested during a festival of in 68 AD and martyred by being dragged through the streets. He was buried under the church he had founded.

In 828, the body of St. Mark was stolen from the Alexandrian church by Venetians to be enshrined in the grand new St. Mark's Basilica in Venice. However, the head of the saint remained in Alexandria and every newly-appointed Patriarch of Alexandria began his service with holding the holy head of St. Mark in his lap and changing its cloth shroud.

The head of St. Mark was moved around a great deal over the centuries, and has been lost for over 250 years. Some of the relics from the body of St. Mark, however, were returned to Alexandria from in 1968 during the papacy of .

History of the Cathedral

*311 AD, before the martyrdom of Pope Peter the Last of Martyrs, he prayed a last prayer on the grave of Saint Mark, the church was then a little chapel on the eastern coast, and it contained the bodies of Saint and some of his holy successors.

* 321 AD: the church was enlarged in the days of Pope Achillas, the 18th Pope.
* 641 AD: the church was greatly ruined when the invaded .
* 680 AD: – the 40th Pope – rebuilt the church.
* 828 AD: the body of Saint was stolen by Italian sailors and was taken from Alexandria to in . However, Saint 's head remained in .
* 1219 AD: the church was destroyed during the time of the crusades, then it was rebuilt once more.
* 1547 AD: [http://links.jstor.org/sici?sici=0081-8658(1959)6%3C7%3AEAEAIT%3E2.0.CO%3B2-2] The voyager mentioned that the church was founded.
* July 1798 AD: the church was pulled down during the French invasion of Alexandria .
* 1819 AD: the church was rebuilt and opened by Pope Peter El Gawly in the time of Mohammed Ali Pasha.
* 1870 AD: the church was renewed in the time of Pope Demetrius II and by the supervision of H.G. Bishop Marcos of El Behira.
* Between the years 1950 – 1952, in the time of Pope Yusab II, the church building was pulled down – as it was old – and another, larger building was built with reinforced concrete after the basilique style. The six marble pillars were transferred into the outer entrance of the church. The icon carrier was accurately cut into parts, each part given a number, and then it was cautiously returned to where it was originally. The two minarets were not pulled down as they were reinforced with concrete and were decorated with beautiful Coptic engravings. Two new bells – brought from Italy – were provided, one for each minaret.
* 1985 – 1990 AD: the church was widened from the western side after the former style with great accuracy, keeping the two minarets in their places, so the entire area of the church was doubled. The six pillars were transferred to the new western entrance of the church supervised by . [ [http://www.elmorkosia.net/church/history.html SAINT MARK Coptic Orthodox Cathedral - Alexandria, EGYPT] ]