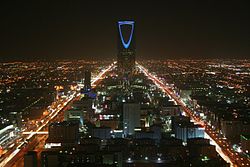 Olaya District (in Arabic: العليا) is a growing financial district in Riyadh, Saudi Arabia. Located in the north side of the city, It hosts important sites and famous local landmarks, such as the Kingdom Centre, which houses the Four Seasons luxurious hotel. It will also contain Al Rajhi Tower, which, upon its completion, will be the tallest building in Saudi Arabia .