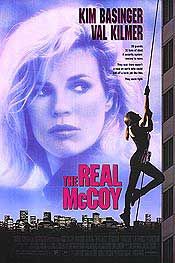 "The Real McCoy" is a film, directed by .

Karen McCoy () is released from prison with nothing but the clothes on her back. Before being incarcerated Karen was "the" of her time, but now she wishes for nothing more than to settle down and start a new life. Unfortunately between a dirty parole officer, old business partners, and an idiot ex-husband she will have to do the unthinkable in order to save her son and new heart throb: another job.