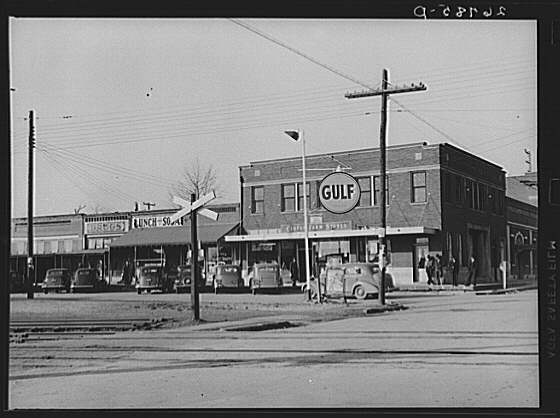 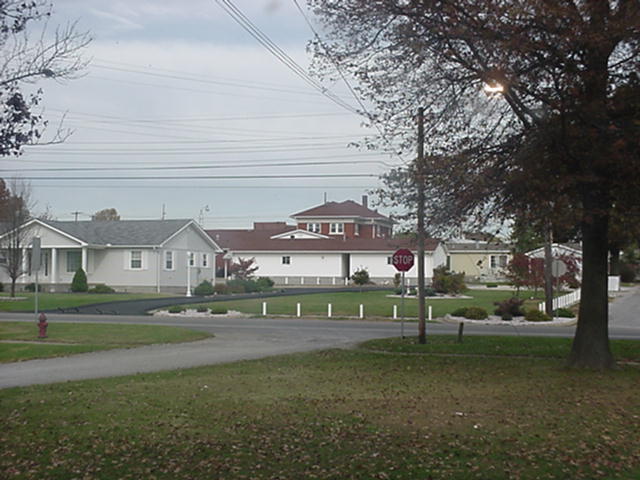 image_size =
image_caption = From the highschool facing north toward downtown.
flag_type =

Carrier Mills is a village in Saline County, , . The population was 1,886 at the 2000 census. Carrier Mills was named after George Washington Carrier and his .

Most of the southeastern half of Carrier Mills' streets are placed parallel to the old NYC Railroad bed and the old trolley bypass on Carline St. compared to the north and south running streets north of the town. Now that the railroad tracks are gone, this makes a large open corridor of grass running from downtown to the east end of town with Washington St. being the only connecting street between east end and the rest of the village.

Home of the Catskin Days and The Wildcats, Carrier Mills is located seven miles (11 km) southwest of , where most of the town's citizens do their business and shopping. It was platted in November 1872 for William Housely as Morrillsville, named after Mr. Morrill the railroad superintendent who sealed a deal with Mill owner G. W. Carrier. It was commonly known and eventually renamed Carrier Mills after inventor G. Washington Carrier ("Uncle Wash") who helped found the town when he built his elaborate just to the south of town, near the old Tuller Mansion farming and property site. The mills were used for the making of to construct the business and homes in the town. Carrier and Morrill closed a real-estate deal to build a train depot there. The town was platted adjacent and north of the newly completed . In 1873 the first postmaster was appointed to Carrier's Mill (the name the railroad had assigned to the new stop). The Village was incorporated in 1894 and with the advent of the and coal mines, the tiny village amidst timber and grew quickly. Today in legal documents its name remains Morrillsville. Carrier Mills did not own a single brick building and the sidewalks were of boards. The business district was mainly from the First National Bank west to the Texaco Gas Station, and all of frame construction. A disastrous fire hit in February of 1908 and burned everything on the north side of the street. In the next month, March 1908, fire burned everything on the south side of the street, from Main to Mill, except the Old Woolcoat Mill Exchange. The business men began immediately to rebuild, all of brick construction.

The first school in Carrier Mills was a large, two-story wooden structure with a bell tower, It was built in the early 1820s and located near the old Sahara Coal Company preparation plant (now abandoned), just northwest of the village. The little structure was made of logs and had a chimney of clay. School year began in August and ended in October because of the extreme cold. A typical school in 1850 was a subscription school - a fee of $2.50 was charged for a two-month period. From the Civil War period until 1875, the only formal school was located near Salem.

In 1887, the first school building in Carrier Mills Village was purchased for the purpose of being a prescription school at the corner of Walnut and Main St. The first major public school in the town was opened in 1903 on Furlong St. The first recognized two year high school course was started in 1915. In 1917 the high school became a registered three-year high school until 1926 when it was changed to a community high school fully accredited by the state of .

Circa 1940, the Carrier Mills Public School building burned down after a disastrous fire starting during a meeting in the basement. A much larger second school was rebuilt a year later as a grade school around the frame of the first burnt school.

On Feb. 4, 1938, the present building was built and occupied, with the gymnasium and auditorium added in 1940. The current enlarged gym was built in 1950-1. At the beginning of 1963 the small town of joined the Carrier Mills school district and they became the Carrier Mills-Stonefort Unit 2 School District.

The traditional downtown business district in Carrier Mills stretched from Route 45 down Main Street to Washington Street, and down Oak and Railroad streets between Main Street and Mill Street, but as of July, 2006 most of the Carrier Mills downtown was deemed condemned and demolished by the . Citizens of Carrier Mills said it was better to see empty lots than rotten buildings. Most citizens found it sad that it had to come to such a conclusion.

The business district has been in a slow decline at least 25 years. No single big event can be tied to the decline of downtown Carrier Mills. Will Scarlet Mine closed in 1987. Sahara's mines closed in 1993, putting hundreds out of work. Each of those closures reverberated through the local economy. Sahara had a reputation for buying locally -- when their purchasing ceased it was a big blow to local businesses. But the Carrier Mills downtown area was on a slow downhill slide before the big mine closures.

In its heyday, Carrier Mills was home to several hotels, two theaters, The Knox, and the Grand Theater, Opened in 1936, and closed in 1970, two banks, the Dodds Bank and the First National, several stores and markets. Nearly all have been slowly torn or burned down over the past 20 years. This last sweep has been the icing on the cake and quickly finished the job that the private owners would have done eventually.

There were small stores on Friend, Main, East End and Washington streets -- in some instances a small store could be found every few blocks. The small grocery stores gradually shut down as people became more apt to own cars and were therefore more mobile -- something that contributed generally to the decline of small towns like Carrier Mills. [Jul 22, 2006 | Harrisburg Daily Register http://www.dailyregister.com/]

A new building ordinance was set in July 2006 for future plans of construction in the vacant downtown area. According to Mayor , "What we're concerned about is when you walk into town, it doesn't look like a farm." Something that seems to have already started to take place with the demolition of these buildings. [Jul 22, 2006 | Harrisburg Daily Register http://www.dailyregister.com/July, 2006]

Carrier Mills Village Board approved entering an agreement with Bob Vancil and Associates to set up a district in an effort to draw new homeowners and businesses in April 2007. The TIF district is a chance for the village to increase the quality of life with new houses and incentives for improving houses that are in disrepair. Village Board members characterized establishing the TIF district as a roll of the dice. Vancil will set up the TIF for $15,000 with $5,000 paid up front. If the Scarlet Lake annexation does not happen and the board learns the TIF will not be of benefit to the village, they will not owe the additional $10,000. Vancil said the village will be responsible for paying $3,000 in legal requirements for the TIF, which include giving notice to all businesses and legal advertising in newspapers.

The Scarlet Lake subdivision is a series of 52 lots within the old Will Scarlet mining area. It will be added to the Village limits as part of the TIF/Annexation project.

:"See also: "Carrier Mills has a great history and influence. Free blacks founded the small early pioneer settlement of Lakeview, a mile south of Carrier Mills, shortly after the War of 1812. "The History of Saline County" (published by Saline CountyGenealogical Society in 1997) states that "Lakeview, a colored community south of town (Carrier Mills), is an older settlement than Carrier Mills. It is the oldest black settlement in Illinois. It was first named Pond Settlement because of the land that surrounded it. According to local tradition free blacks living in the Pond Settlement helped runaway slaves and indentured servants escape from the saline works and the near Equality, Illinois. [Jul 22, 2006 | Harrisburg Daily Register http://www.dailyregister.com/]

Lakeview had its own school and grocery store along with many homes. In 1850, a Union Church was established near Carrier Mills in Saline Co., Ill. Most members were either Baptist or Methodist. An African Methodist Episcopal Church was organized at the home of Irvin Allen, who built a one-room log church building on his property. After the church burned, the congregation rebuilt and moved the church to Carrier Mills, where it sits today. This congregation is now Baber Chapel AME Church. The Lakeview cemetery has become a state historical landmark. The area of Lakeview is still a nearly 100% black area. After the closing of the Lakeview school in the 1950s, many people moved to the east side of Carrier Mills. There was much tension felt between the white and black populations in the town. [ [http://www.lib.niu.edu/ipo/1996/ihy960463.html Early Towns of Saline County ] ]

The area, some convert|143|acre|km2 located approximately two miles south of Carrier Mills was inhabited by prehistoric people through out three different archaeological periods. Until the turn of the century, the South Fork of the Saline River was a meandering stream with large areas of swamps and shallow cypress lakes nearby. These areas were rich in plants and animals that prehistoric inhabitants sought for food. Therefore, the locality became a natural focal point for human settlement. In 1978 and 1979, archeologists intensively investigated this area. Excellent preservation conditions permitted the recovery of many tools and animal and plant remains that have provided significant new insights into the prehistory of .

Sporadic use of the area by small groups of hunters and gatherers can be dated to 8000 BC, and the area was used more or less continuously until . Settlement activity increased dramatically during the late Middle , 4500 to 3000 BC, when the area was inhabited by larger groups with a more sedentary lifestyle. These occupants left archaeological evidence containing many artifacts and burials. The area also saw heavy use during the Middle and Late , 200 BC to AD 900. The peoples of those times increasingly focused on the collection and storage of plant foods and began to domesticate some native plants. The final prehistoric inhabitants were Mississippian Period Indians (AD 900 to 1400) who lived and scattered farmsteads and cultivated corn and squash. [ [http://www.nostalgiaville.com/travel/Illinois/carriermills/carrier%20mills%20il.htm Carrier Mills, Illinois ] ]