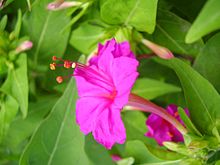 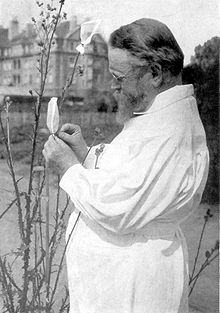 Non-Mendelian inheritance is a general term that refers to any pattern of inheritance in which traits do not segregate in accordance with Mendel’s laws. These laws describe the inheritance of traits linked to single genes on chromosomes in the nucleus. In Mendelian inheritance, each parent contributes one of two possible alleles for a trait. If the genotypes of both parents in a genetic cross are known, Mendel’s laws can be used to determine the distribution of phenotypes expected for the population of offspring. There are several situations in which the proportions of phenotypes observed in the progeny do not match the predicted values.

Although inheritance of traits in fungi, viruses, and bacteria are all non-Mendelian, the phrase "non-Mendelian inheritance" is usually only used to describe the exceptions which occur in eukaryotic reproduction.[1]

Extranuclear inheritance (also known as cytoplasmic inheritance) is a form of non-Mendelian inheritance first discovered by Carl Correns in 1908.[3] While working with Mirabilis jalapa Correns observed that leaf color was dependent only on the genotype of the maternal parent. Based on these data, he determined that the trait was transmitted through a character present in the cytoplasm of the ovule. Later research by Ruth Sager and others identified DNA present in chloroplasts as being responsible for the unusual inheritance pattern observed. Work on the poky strain of the mold Neurospora crassa begun by Mary and Hershel Mitchell[4] ultimately led to the discovery of genetic material in mitochondria as well.

According to the endosymbiont theory, mitochondria and chloroplasts were once free living organisms that were each taken up by a eukaryotic cell.[5] Over time, mitochondria and chloroplasts formed a symbiotic relationship with their eukaryotic hosts. Although the transfer of a number of genes from these organelles to the nucleus prevents them from living independently, each still possesses genetic material in the form of double stranded DNA.

In humans, mitochondrial diseases are a class of diseases, many of which affect the muscles and the eye.

Gene conversion can be one of major forms of non-Mendelian inheritance. Gene conversion is a reparation process in DNA recombination, by which a piece of DNA sequence information is transferred from one DNA helix (which remains unchanged) to another DNA helix, whose sequence is altered. This may occur as a mismatch repair between the strands of DNA which are derived from different parents. Thus the mismatch repair can convert one allele into the other. This phenomenon can be detected through the offspring non-Mendelian ratios, and is frequently observed, e.g., in fungal crosses.[6]

Another form of non-Mendelian inheritance is known as infectious heredity. Infectious particles such as viruses may infect host cells and continue to reside in the cytoplasm of these cells. If the presence of these particles results in an altered phenotype, then this phenotype may be subsequently transmitted to progeny.[7] Because this phenotype is dependent only on the presence of the invader in the host cell’s cytoplasm, inheritance will be determined only by the infected status of the maternal parent. This will result in a uniparental transmission of the trait, just as in extranuclear inheritance.

One of the most well studied examples of infectious heredity is the killer phenomenon exhibited in yeast. Two double-stranded RNA viruses, designated L and M, are responsible for this phenotype.[8] The L virus codes for the capsid proteins of both viruses, as well as an RNA polymerase. Thus the M virus can only infect cells already harboring L virus particles. The M viral RNA encodes a toxin which is secreted from the host cell. It kills susceptible cells growing in close proximity to the host. The M viral RNA also renders the host cell immune to the lethal effects of the toxin. For a cell to be susceptible it must therefore be either uninfected, or harbor only the L virus.

The L and M viruses are not capable of exiting their host cell through conventional means. They can only transfer from cell to cell when their host undergoes mating. All progeny of a mating involving a doubly infected yeast cell will also be infected with the L and M viruses. Therefore, the killer phenotype will be passed down to all progeny.

Heritable traits that result from infection with foreign particles have also been identified in Drosophila. Wild type flies normally full recover after being anesthetized with carbon dioxide. Certain lines of flies have been identified that die off after exposure to the compound. This carbon dioxide sensitivity is passed down from mothers to their progeny. This sensitivity is due to infection with Sigma virus, a rhabdovirus only capable of infecting Drosophila.[9]

Although this process is usually associated with viruses, recent research has shown that the Wolbachia bacterium is also capable of inserting its genome into that of its host.[10][11]

Genomic imprinting represents yet another example of non-Mendelian inheritance. Just as in conventional inheritance, genes for a given trait are passed down to progeny from both parents. However, these genes are epigenetically marked before transmission, altering their levels of expression. These imprints are created before gamete formation and are erased during the creation of germ line cells. Therefore, a new pattern of imprinting can be made with each generation.

Genes are imprinted differently depending on the parental origin of the chromosome that contains them. In mice, the insulin-like growth factor 2 gene undergoes imprinting. The protein encoded by this gene helps to regulate body size. Mice that possess two functional copies of this gene are larger than those with two mutant copies. The size of mice that are heterozygous at this locus depends on the parent from which the wild type allele came. If the functional allele originated from the mother, the offspring will exhibit dwarfism, whereas a paternal allele will generate a normal sized mouse. This is because the maternal Igf2 gene is imprinted. Imprinting results in the inactivation of the Igf2 gene on the chromosome passed down by the mother.[12]

Imprints are formed due to the differential methylation of paternal and maternal alleles. This results in differing expression between alleles from the two parents. Sites with significant methylation are associated with low levels of gene expression. Higher gene expression is found at unmethylated sites.[13] In this mode of inheritance, phenotype is determined not only by the specific allele transmitted to the offspring, but also by the sex of the parent that transmitted it.

Individuals who possess cells with genetic differences from the other cells in their body are termed mosaics. These differences can result from mutations that occur in different tissues and at different periods of development. If a mutation happens in the non-gamete forming tissues, it is characterized as somatic. Germline mutations occur in the egg or sperm cells and can be passed on to offspring.[14] Mutations that occur early on in development will affect a greater number of cells and can result in an individual that can be identified as a mosaic strictly based on phenotype.

Mosaicism also results from a phenomenon known as X-inactivation. All female mammals have two X chromosomes. To prevent lethal gene dosage problems, one of these chromosomes is inactivated following fertilization. This process occurs randomly for all of the cells in the organism’s body. Because a given female’s two X chromosomes will almost certainly differ in their specific pattern of alleles, this will result in differing cell phenotypes depending on which chromosome is silenced. Calico cats, which are almost all female,[15] demonstrate one of the most commonly observed manifestations of this process.[16]

Trinucleotide repeat disorders also follow a non-Mendelian pattern of inheritance. These diseases are all caused by the expansion of microsatellite tandem repeats consisting of a stretch of three nucleotides.[17] In normal individuals, the number of repeated units is relatively low. With each successive generation, there is a chance that the number of repeats will expand. As this occurs, progeny can progress to permutation and ultimately affected status. Individuals with a number of repeats that falls in the permutation range have a good chance of having affected children. Those who progress to affected status will exhibit symptoms of their particular disease. Prominent trinucleotide repeat disorders include Fragile X syndrome and Huntington's disease. In the case of Fragile X syndrome it is thought that the symptoms result from the increased methylation and accompanying reduced expression of the fragile X mental retardation gene in individuals with a sufficient number of repeats.[18]