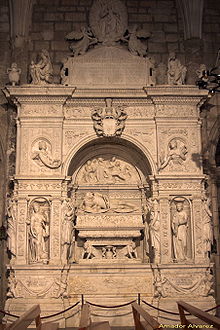 Giovanni da Nola (1478–1559), also known as Giovanni Merliano, was an Italian sculptor and architect of the Renaissance, active in Naples.

He was born in 1478, the son of a leather merchant, in Nola near Naples.

As an architect he built a number of palaces in Naples, including the Palazzo Giusso, now the home of the Naples Eastern University.

Many of the statues he created in Naples were removed to Spain by the viceroys then in charge of the Kingdom of Naples on behalf of the Spanish crown. When the viceroy Ramón de Cardona died in Naples in 1522, da Nola built his tomb in Naples, but it was then transported piece by piece to Bellpuig where da Cardona was buried. It remains one of the main examples of Italian renaissance art in Catalonia.

Most of his works that remain in Naples are in the churches of the city. They include:

Decorations da Nola made for the royal entry of Emperor Charles V in Naples (1535) are still to be seen on the Porta Capuana.