Stormtroopers outside a Berlin store posting signs with the words "Germans! Defend yourselves! Do not buy from Jews" ("Deutsche! Wehrt Euch! Kauft nicht bei Juden!").

The Nazi boycott of Jewish businesses in Germany took place on 1 April 1933, soon after Adolf Hitler was sworn in as Chancellor on 30 January 1933. The boycott was the first of many measures against the Jews of Germany, which ultimately culminated in the "Final Solution".

Antisemitism in Germany grew increasingly respectable after the first world war and was most prevalent in the universities. By 1921, the German student union, the Deutschen Hochschulring, barred Jews from membership. Since the bar was racial, it included Jews who had converted to Christianity.[1] The bar was challenged by the government leading to a referendum in which 76% of students voted for the exclusion.

From 1931-2 SA "brownshirt" thugs physically prevented customers from entering Jewish shops, windows were systematically smashed and Jewish shop owners threatened. In Christmas 1932, the central office of the Nazi party organized a nation-wide boycott. In addition German businesses, particularly large organizations like Banks, Insurance companies and industrial firms such as Siemens, increasingly refused to employ Jews.[2] Many hotels, restaurants and Cafes barred Jews from entering and the resort island of Borkum banned Jews anywhere on the island. Such behaviour was common in pre-war Europe, however in Germany it reached new extremes. 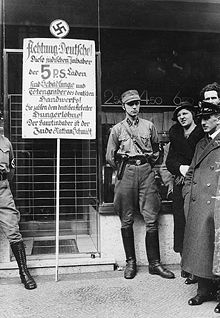 In March 1933 the Nazis finally achieved a majority in the German parliament and Hitler became Chancellor. Following the victory there was widespread violence and hooliganism directed at Jewish businesses and individuals.[1] Jewish lawyers and judges were physically prevented from reaching the courts. In some cases the SA created improvised concentration camps for prominent Jewish anti-Nazis.[3]

There was widespread international horror at the persecution of the Jews. At the same time, a long-term Jewish boycott of German goods started in March 1933, prompting the UK newspaper Daily Express to go so far as to put as headline "Judea Declares War on Germany".[4]. The Nazis used this to justify a one day national boycott against Jewish Germans.[3] On 1 April 1933, the Nazis carried out their first nationwide, planned action against Jews: a boycott targeting Jewish businesses and professionals.

On the day of the boycott, the SA stood menacingly in front of Jewish-owned department stores and retail establishments, and the offices of professionals such as doctors and lawyers. The Star of David was painted in yellow and black across thousands of doors and windows, with accompanying antisemitic slogans. Signs were posted saying "Don't Buy from Jews", "The Jews Are Our Misfortune." and "Go to Palestine". Throughout Germany, rare acts of violence against individual Jews and Jewish property occurred.

The boycott was ignored by many individual Germans who continued to shop in Jewish-owned stores during the day.[5][6]

The national boycott operation marked the beginning of a nationwide campaign by the Nazi party against the entire German Jewish population.

A week later, on 7 April 1933, the Law for the Restoration of the Professional Civil Service was passed, which restricted employment in the civil service to "Aryans." This meant that Jews could not serve as teachers, professors, judges, or other government positions. Jewish government workers, including teachers in public schools and universities, were fired. Doctors followed closely behind. Jews were barred from claiming any rights as war-veterans (35,000 German Jews died in the first world war). Any Jews who had acquired German citizenship had their citizenship stripped from them.[3] A Jewish quota of 1% was introduced for the number of Jews allowed to attend universities.

"Jewish" books were burnt in elaborate ceremonies and laws, clearly defining who was or was not, Jewish were passed. Jewish owned businesses were gradually forced to sell up to (non-Jewish) Germans.

After the Invasion of Poland in 1939, the Nazis forced Jews into Ghettos and completely banned them from public life. They eventually turned to genocide (Holocaust).

This article incorporates text from the United States Holocaust Memorial Museum, and has been released under the GFDL.