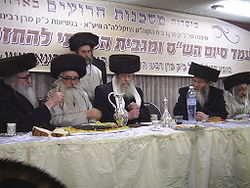 Mishkenos HoRoim (Hebrew: משכנות הרועים‎), also spelled Mishkenot HaRoim, Mishkenois HaRoim, is a small Hasidic group located in Meah Shearim, Jerusalem. It is known as a very isolated and fervently religious group, known for its virulent anti-Zionism, even by Haredi standards. Mishkenos HoRoim is also known as Kahal Yereim (Community of the Fearing). The main synagogue is located on Meah Shearim Street. There is also a Mishkenos HoRoim synagogue in Ramat Beit Shemesh Bet.

Speech by (first) the Rebbe of Mishkenos HoRoim; after that (at 12 minutes), by the Chief Rabbi of the Edah HaChareidis, Rabbi Yitzchok Tuvioh Weiss, at a yahrtzeit tish for Rabbi Amram Blau in Mishkenos HoRoim, Jerusalem, July 2008.

The previous Rebbe of Mishkenos HoRoim, Rabbi Binyomin Rabinowitz, was a member of the Badatz (rabbinical court) of the Edah HaChareidis. One time, he said: "It is clear that if no religious Jews would be cooperating with the Zionists, then a long time ago already their entire state would have been annulled and the Messiah would have come, and this is the only reason for why the redemption is being been delayed."[1]

During his lifetime, Rabbi Amram Blau used to pray at Mishkenos HoRoim. Mishkenos HoRoim is widely seen as the Hasidic version of Neturei Karta (which itself is not Hasidic, but rather 'Litvish'). Every year in the summer, on the anniversary of Rabbi Blau's death, a yahrzeit tish is held at Mishkenos HoRoim. On July 18, 2008, the yahrtzeit tish was attended by the Chief Rabbi of the Edah HaChareidis, Rabbi Yitzchok Tuvioh Weiss. During his speech, the Rebbe of Mishkenos HoRoim spoke about killing those who commit crimes, about the reward Moses received for killing the Midianites, and compared the Zionists to the Midianites. He also spoke about "why we throw stones [at the police] in Meah Shearim."[2]