Otto Ohlendorf testifying on his own behalf. 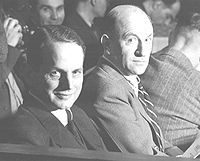 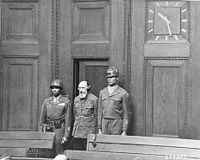 Paul Blobel is sentenced to death

The Einsatzgruppen Trial (or, officially, The United States of America vs. Otto Ohlendorf, et al.) was the ninth of the twelve trials for war crimes the U.S. authorities held in their occupation zone in Germany in Nuremberg after the end of World War II. These twelve trials were all held before U.S. military courts, not before the International Military Tribunal, but took place in the same rooms at the Palace of Justice. The twelve U.S. trials are collectively known as the "Subsequent Nuremberg Trials" or, more formally, as the "Trials of War Criminals before the Nuremberg Military Tribunals" (NMT).

The Einsatzgruppen were SS mobile death squads, operating behind the front line in Nazi-occupied eastern Europe. From 1941 to 1943 alone, they murdered more than one million Jews and tens of thousands of "partisans", Roma, disabled persons, political commissars, and others. The 24 defendants in this trial were all officers of these Einsatzgruppen and faced mass murder charges. The tribunal stated in its judgment:

... in this case the defendants are not simply accused of planning or directing wholesale killings through channels. They are not charged with sitting in an office hundreds and thousands of miles away from the slaughter. It is asserted with particularity that these men were in the field actively superintending, controlling, directing, and taking an active part in the bloody harvest.[1]

The judges in this case, heard before Military Tribunal II-A, were Michael A. Musmanno (presiding judge) from Pennsylvania, John J. Speight from Alabama, and Richard D. Dixon from North Carolina. The Chief of Counsel for the Prosecution was Telford Taylor; the Chief Prosecutor for this case was Benjamin B. Ferencz. The indictment was filed initially on July 3 and then amended on July 29, 1947 to also include the defendants Steimle, Braune, Hänsch. Strauch, Klingelhöfer, and von Radetzky. The trial lasted from September 29, 1947 until April 10, 1948.

^ Rasch had to be removed from the courtroom during the arraignment due to his poor health; he was arraigned separately on September 22, 1947.

^ Strauch suffered an epileptic attack during the arraignment on September 15, 1947. His defense later tried to get him removed from the trial on medical grounds, but the tribunal dismissed this, stating that Strauch's testimonies (which he did give subsequently) were coherent and showed no reason why he shouldn't be mentally capable to stand trial.

^ While Fendler was found guilty on all counts, the tribunal considered the evidence presented insufficient to prove that he ordered or helped plan the killings. He seems to have held primarily an office post.

^ Rühl was found guilty only on count 3; regarding counts 1 and 2, the tribunal found him not guilty, stating that as a subaltern officer, he was not responsible for the atrocities committed by Einsatzgruppe D and in no position to prevent them, and although he knew of the killings, it could not be proved that he directly participated in them.

^ Graf was found guilty only of membership in the SD. He had actually been expelled from the SS for "general indifference to the organization" [2] and later had tried to be relieved from the SD.[2] On counts 1 and 2, he was also found not guilty, because as a noncommissioned officer, he had never held any command post, and in fact even refused one once.[2]

Of the 14 death sentences, only four were carried out; the others were commuted to prison terms of varying lengths in 1951. In 1958, all convicts were released from prison.

From the tribunal's judgment:

[The facts] are so beyond the experience of normal man and the range of man-made phenomena that only the most complete judicial inquiry, and the most exhaustive trial, could verify and confirm them. Although the principal accusation is murder, [...] the charge of purposeful homicide in this case reaches such fantastic proportions and surpasses such credible limits that believability must be bolstered with assurance a hundred times repeated.
...a crime of such unprecedented brutality and of such inconceivable savagery that the mind rebels against its own thought image and the imagination staggers in the contemplation of a human degradation beyond the power of language to adequately portray.
The number of deaths resulting from the activities with which these defendants have been connected and which the prosecution has set at one million is but an abstract number. One cannot grasp the full cumulative terror of murder one million times repeated.
It is only when this grotesque total is broken down into units capable of mental assimilation that one can understand the monstrousness of the things we are in this trial contemplating. One must visualize not one million people but only ten persons — men, women, and children, perhaps all of one family — falling before the executioner's guns. If one million is divided by ten, this scene must happen one hundred thousand times, and as one visualizes the repetitious horror, one begins to understand the meaning of the prosecution's words, 'It is with sorrow and with hope that we here disclose the deliberate slaughter of more than a million innocent and defenseless men, women, and children.'[1]