Born in Lublinitz (Lubliniec) in Upper Silesia, the son of a veterinarian, Lammers completed law school at the universities of Breslau (Wrocław) and Heidelberg, obtained his doctorate in 1904, and was appointed judge at the Amtsgericht of Beuthen (Bytom) in 1912. As a volunteer and officer of the German Army he received the Iron Cross, First and Second Class during World War I, then resumed his career as a lawyer and joined the national conservative German National People's Party (DNVP), reaching the position of a undersecretary at the Reich Ministry of the Interior by 1922.

In 1932, Lammers joined the Nazi Party and achieved rapid promotion, appointed head of the police department, and in the course of the Nazi Machtergreifung in 1933 a Secretary of State and Chief of the Reich Chancellery.[1] At the recommendation of Reich Minister Wilhelm Frick, he became the center of communications and chief legal adviser for all government departments. From 1937, he was a member of Hitler's cabinet as a Reich Minister without portfolio, and from 30 November 1939 a member of the Council of Ministers for the Defence of the Reich. In this position he was able to review all pertinent documents regarding national security and domestic policy even before they were forwarded to Hitler personally.

Beginning in January 1943, Lammers served as President of the cabinet when Hitler was absent from their meetings. Along with Martin Bormann, he increasingly controlled access to Hitler. In February 1943, following the Battle of Stalingrad, Bormann with Lammers attempted to create a three-man junta representing the Party (Bormann), The State (Lammers), and the Army which would have been led by Field Marshal Wilhelm Keitel, chief of the OKW (armed forces high command). This Committee of Three would have exercised dictatorial powers over the home front. Joseph Goebbels, Albert Speer, Hermann Göring and Heinrich Himmler all saw this proposal as a power grab by Bormann and Lammers and a threat to their power, and combined to block it. However, this scheme eventually collapsed due to the frequent infighting and mistrust the party, military, and the various ministries had amongst one another as Lammers himself eventually lost power and influence due to the increasing irrelevancies of his post due to the war. 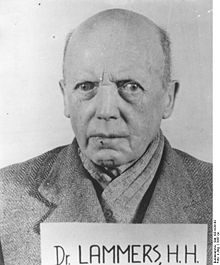 Lammers in 1947 facing trial for crimes against humanity

In April Lammers was arrested by Hitler's forces during the final days of the Third Reich, in connection with the upheaval surrounding Hermann Göring, who thought that Hitler had stepped down. Hitler vehemently opposed giving up power and wanted Lammers shot. He was rescued when he was captured by American forces, but in the meanwhile his wife committed suicide near Obersalzberg (the site of Hitler's mountain retreat) in early May 1945, as did his daughter two days later.[2]

After the war in April 1946 Lammers was a witness at the Nuremberg tribunal. In April 1949 he was put under Subsequent Nuremberg Trials in the Ministries Trial and sentenced to 20 years in prison. The sentence was later reduced to 10 years by U.S. High Commissioner John J. McCloy, and he was finally pardoned and released in 1952. He died on 4 January 1962 in Düsseldorf, and was buried in Berchtesgaden in the same plot as his wife and daughter.