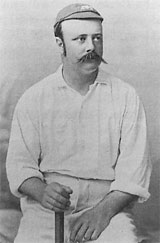 William (Billy) Lloyd Murdoch ( – ) was an n , who captained the Australian team on tours to in 1880, 1882 (when the Ashes legend was born), 1884 and 1890. Murdoch was born in Sandhurst (now Bendigo), Victoria to Gilbert Murdoch and his wife Susanna (née Fleigge). Early in the 1860s, the Murdochs moved to , and Billy played for the Albert Club with . He made his first-class entry in 1875, at the time regarded as the finest in Australia, and a highly-rated right-handed . He played in the second Test match ever played, the 1877 clash against England at the (MCG). Later that year, he qualified as a solicitor and opened up a practice, "Murdoch & Murdoch", with his brother Gilbert.

Murdoch established himself as one of the era's greatest batsmen over the next few years, leading Australia in several Test series against England. In 1881-82 he became the first man other than to score a first-class triple century when, as captain, he made 321 for New South Wales against Victoria at the SCG. [cite web | url=http://cricketarchive.co.uk/Archive/Records/Firstclass/Overall/Highest_Player_Scores_Chronological.html | title=Individual Scores of 300 and More in an Innings in First-Class Cricket in Chronological Order | accessdate=2007-09-22 | publisher=] The innings comprised 38 fours, nine threes, 41 twos and sixty singles from all of ten Victorian bowlers. It was this knock which established him in the public reckoning as Australia's finest batsman. So unvanquishable was he that (with whom Murdoch would share many a fine batting stand in the years to come) was reduced to bowling leg-theory, the first known instance of that controversial tactic.

Murdoch was never far from controversy. His omission as wicketkeeper in the very first Test resulted in Australia’s premier fast bowler, Fred Spofforth, boycotting the match. In 1884 as captain of Australia he was involved in the players' strike, where the Australian players refused to play unless they received a greater share of the gate takings. He was also the batsman whose contentious runout caused friction between New South Wales and a visiting English team led by which also caused a spectator riot.

His best Test performances more often occurred in where both his Test hundreds were scored, 153 not out in the first Test in the old country in 1880 at and 211 at the same ground four years later. On the 1880 and 1884 tours he led the Australian batting averages. In England, he was regarded as a superb captain and enough of a gentleman to be invited to captain Sussex, which he did for several seasons. He was widely regarded the finest Australian of his day, being bettered only by the English champion .

Murdoch was more of an off side player whose drives and cuts were regarded as among the best of his day but his leg side play as well as his ability against good spin was not apparently as good. Also, he was believed to be lacking against top-class pace bowling on difficult wickets; if conditions, were perfect, however, his batting often followed suit.

Later in life Murdoch settled in England, and he and became the first cricketers to represent two nations at Test level when the two former Australian team-mates represented England against South Africa in in March 1892.

He again visited England in 1890, but though he was top in the averages he had not had time to regain his true form. He then settled in England, qualified for Sussex, and captained the county for several seasons. His style of play did not favour him in wet seasons, but he made many good scores over a period of about 15 years. Among these may be mentioned 155 for London County against Lancashire in 1903, and in the following year 140 for Gentlemen versus Players, though he was then in his forty-ninth year.

Murdoch's standing as one of the greatest first-class batsmen of his era were strengthened by his statistics; 16,953 runs scored in 391 matches at the average of 26.86 at a time when batting averages were much lower than in modern times.

He died in , in ; present at the Test match between Australia and South Africa, he was seized with during the lunch and died later in the afternoon. His body was embalmed and brought back to for burial at in the east end of . Murdoch's best Test batting score of 211 was made for Australia against England, , 1884. It was the first double hundred in Test cricket. His Test captaincy record for Australia was: 16 matches, 5 wins, 7 losses, 4 draws