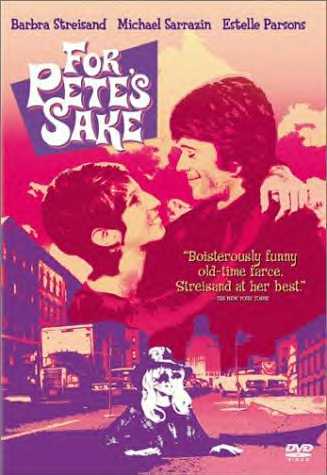 "For Pete's Sake" is a 1974 American directed by . The by and Maurice Richlin chronicles the misadventures of a housewife. In 1977 it was remade in as the film "Aap Ki Khatir".

Henrietta and Pete Robbins are a young couple struggling to get by on the income he earns as a cab driver. His pompous sister-in-law Helen delights in reminding them that an early marriage robbed him of a college education and how much better off than they she and her husband Fred are. When Henrietta gets an inside tip on futures, she borrows $3,000 from a to purchase the stock. Unfortunately, its value doesn't increase as rapidly as she anticipated, and when she's unable to pay her debt, her contract is sold to Mrs. Cherry, a grandmotherly-type who operates a ring. When Henrietta's initial attempts at entertaining clients prove to be less than successful, her contract is sold yet again . . . and again, as Henrietta fails to fulfill the requirements of each new individual to whom she becomes indebted - each time for more money - and tries to keep her new enterprises - er, then cattle rustler - secret from her unsuspecting husband.

The title tune, "For Pete's Sake (Don't Let Him Down)," was written by Artie Butler and , former lead singer of .

In his review in the "", called the film "an often boisterously funny old-time " and added, "The movie may not hold together as any kind of larger comic statement, but the laughs are self-sustaining throughout . . . Miss Streisand's comedy range is narrow, like a character's, but "For Pete's Sake" operates almost entirely within that range. She's at her best in this kind of farce." [ [http://movies.nytimes.com/movie/review?res=9F0CE6DF153AEF34BC4F51DFB066838F669EDE "New York Times" review] ]

"" says, "Yates sure is an erratic talent . . . Here he's adrift in a sea of poor performances and bad comic timing." [ [http://www.timeout.com/film/reviews/66924/for-petes-sake.html "Time Out London" review] ]