/ˈmaɪnəl/ my-nəl)[2] is a village and civil parish in the Kennet Valley in Wiltshire about 1 mile (1.6 km) east of the market town of Marlborough.

The toponym is derived from the Old English but the site has been occupied since the Roman occupation of Britain, when the fortress town of Cunetio stood at an important road junction on approximately the same site.[3] No remains of this fortress are now standing, but are clearly visible on aerial photographs. The Cunetio Hoard of Roman coins was discovered here in 1978. The name of the River Kennet, which runs through Mildenhall, is thought to have been derived from the Roman name, which is also used on the village's coat-of-arms.

Cunetio was deserted as a Romano-British site in about AD 450, but the site was reoccupied in the Anglo-Saxon era and a West Saxon charter drawn up between 803 and 805 refers to this settlement in its first recognisably modern form as Mildanhald,[4] meaning "a nook of land of a woman called Milde or a man called Milda".[5] The village is again mentioned in Domesday Book in 1086 as Mildenhalle and the name has since undergone numerous subtle changes in spelling and pronunciation. 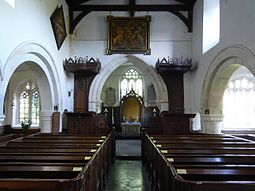 The Church of England parish church of Saint John the Baptist originates from before the Norman Conquest:[citation needed] some parts of the tower are undoubtedly Saxon in date. However, much of the present building dates from the thirteenth century. In 1816 the interior was refurbished by the villagers. Of particular note are the box pews and the twin pulpit and reading desk.

St. John's parish is now a member of the Marlborough team ministry.[6]

The village has a public house, The Horseshoe Inn. Until a few years ago Mildenhall had a post office and village shop. The village hall was built in 1988.

Mildenhall usually holds a village fete, usually in mid-September on the village playing field (weather permitting), as well as a Guy Fawkes Bonfire Night and a Duck Race (using plastic ducks). Mildenhall publishes a monthly newsletter called The Parish Pump, now a joint publication with the neighbouring village of Axford.