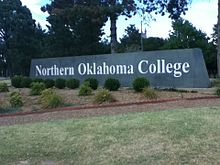 Northern Oklahoma College was founded on March 1, 1901 by James Wilkin via passage of an appropriation bill by Oklahoma's sixth Territorial Legislature. NOC, then called University Preparatory School at Tonkawa, prepared high school students to enter the University of Oklahoma. Classes began on September 8, 1902 with a beginning enrollment of 217 students and 7 faculty.[2] World War I caused a school closure from 1917 to September 2, 1919.[3] In 1921, the school added a college curriculum, and continued to instruct high school students until 1951. The North Central Association of Colleges and Universities accredited the school in 1948, and in 1965 the school was renamed Northern Oklahoma College.

Dr. Cheryl Evans, former Dean of the Northwestern Oklahoma State University's Enid campus (2004-2011), was elected as the next Northern Oklahoma College President on February 17, 2011 by a unanimous vote by the Board of Regents.[4] Dr. Evans is the first female president in the history of the college.[5] Her education includes a B.A. in Mass Communications from Northwestern, an M.A. in Communication from Wichita State University, and an Ed.D. at Oklahoma State University.[4] She was preceded in office by Dr. Roger Stacy (2008-2011), Dr. Joe Kinzer (1990-2008), and Dr. Edwin E. Vineyard (1965-1990).[6]

Sunken Gardens at the Enid campus of Northern Oklahoma College

The Tonkawa campus of Northern Oklahoma College is the home of the Eleanor Hays Art Gallery, which hosts exhibits by Oklahoma artists throughout the academic year. It is also home to radio station KAYE-FM, the A. D. Buck Museum of Science and History, and the North Oklahoma Botanical Garden and Arboretum 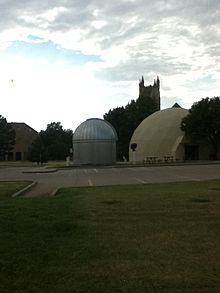 A view of the observatory at Northern Oklahoma College Enid.

The Enid campus of Northern Oklahoma College, established in 1999, is located on the former site of Phillips University, and features an observatory for students to study astronomy.

In 2003, Northern added a campus in Stillwater, Oklahoma. Applicants who do not meet Oklahoma State University admission requirements may attend the NOC-OSU Gateway Program held on the campus.[7]

Arts Adventure is an annual summer program held by NOC.

The Tonkawa campus has basketball, soccer, baseball, and softball teams. Northern Oklahoma College won the 1979 NJCAA Women's Basketball Championship, 74-52 against Tyler Junior College. The professional wrestler "The Big Show" played basketball for the Mavericks in 1990-1991 before transferring to Wichita State. NBA player John Starks played basketball for the Mavericks during one semester in the 1980s. Pitcher Clint Straka was drafted into the Seattle Mariners in 2006. He now plays baseball for the University of Central Oklahoma.[8]

The Enid Jets were established in 2001, and have had 18 championships, 21 NJCAA All-Americans, and 58 Academic All-Americans. The Jets have women's volleyball, men's basketball, women's basketball, and men's baseball teams. The Lady Jets basketball team were NJACC Region II Champs 2010 and 2011. The Enid Jets baseball team were conference champions in 2002, 2003, and 2005. They were Region II champions in 2002 and 2004, and runners up in 2009. They were Southwest District Champions in 2002, and also received 3rd place in the NJCAA World Series in that year.[9]