Mikel Arteta Amatriain (born 26 March 1982) is a Spanish footballer who plays for Arsenal as a midfielder.

Arteta started out as a trainee with FC Barcelona but could not break his way into the first team and was eventually loaned to Paris Saint-Germain in the French league. He was then signed by Scottish Premier League club Rangers with whom he would win the domestic treble of the league, Scottish Cup and League Cup in the season of 2002–03. After success in Scotland, Arteta moved to back to Spain to play for Real Sociedad but failed to establish himself within the first team and was loaned to Everton for the remainder of the 2004–05 season, prior to signing permanently in July 2005. He then made a permanent transfer to Arsenal in 2011.

Arteta has represented Spain at under-21 level, but he has not played for the senior national team.[2]

Born in San Sebastián, Gipuzkoa, Basque Country, Arteta began his football career at the local side Antiguoko and befriended fellow midfielder Xabi Alonso as they would play together every weekend. The two would often play along the beaches of San Sebastián and dreamed of playing together at Real Sociedad when they were older. Arteta left for the FC Barcelona B squad at 15 years of age while Alonso signed for Real Sociedad later.[3] Despite his potential Arteta failed to break into the first team, and went out on loan to French club Paris Saint-Germain in 2000.

Arteta joined Scottish club Rangers in 2002, winning the 2003 Scottish Premier League title as well as the Scottish Cup and Scottish League Cup. Arteta enjoyed a successful first season at Rangers and quickly established himself as a first team regular and a fans' favourite. He returned to Spain after two seasons in Glasgow.[3]

He joined Real Sociedad for €5.2 million in 2004 with the idea of Arteta and Alonso playing together. However, Alonso left for Liverpool and Arteta failed to establish himself in the team.[3] 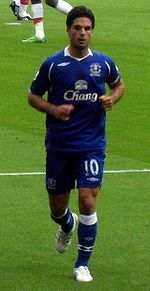 Arteta playing for Everton in October 2008.

Everton Manager David Moyes signed Arteta in the 2005 January transfer window on loan with a view to a permanent transfer. Seen as a replacement for Danish midfielder Thomas Gravesen, Arteta played a vital part in helping Everton achieve UEFA Champions League qualification possibility, however they were knocked out in the last qualifying round.[3] He scored his first Everton goal in the 4–0 victory over Crystal Palace. Arteta signed a permanent five-year deal in July 2005 for a fee of £2 million.

Arteta's creativity was an essential part of Everton's attacking play the following season,[citation needed] and he had scored six goals by the end of January.[6] That improved further a season later, scoring nine times in the 2006–07 season and once again ending the season as the Player of the Year. He helped Everton secure a place in the UEFA Cup and was ranked by the ACTIM Index as the sixth best player in the Premiership but it did not earn him a call-up into the full Spain squad.[6] During the summer of 2007, he signed a new five-year contract.[6]

Arteta added another accolade to his growing collection during the 2007–08 season, when he picked up North West Footballer of the Year award. He then became the first Everton player in five years to receive the Liverpool Echo's Sports Personality of the Year award in January 2008.

Arteta suffered a stomach injury in the second half of the season, and shortly before the final game of the campaign, he underwent surgery to rectify the problem.[6] He scored his first goal of the 2008–09 season in the Premier League opener versus Blackburn Rovers with a free kick. He was named captain for a 2–2 draw with Newcastle United, scoring a penalty in the game. In February, Arteta was carried off on a stretcher in a 0–0 draw with Newcastle having injured a ligament in his knee, days after his first inclusion in the Spanish national team squad. The injury kept him out for the rest of the 2008–09 season and the first five months of 2009–10.

Arteta made his return from injury in January 2010 as a substitute in an FA Cup tie against Birmingham City, before starting in a 2–1 home Premier League win against Chelsea. His first two goals of the season were scored in a 5–1 win over Hull City in March 2010. In August that year he signed a five-year contract extension with Everton.[7]

Upon departing Everton, Arteta said “I am 29 years old so I haven’t got much time left to take a chance like this one. I have done my best for Everton." A few weeks later he revealed to the Liverpool Echo that the spirit in Everton's dressing room is the 'best in football'.

Arteta signed with Arsenal on 31 August 2011 on a four-year deal for a reported fee of £10 million.[8] He made his debut on 10 September in a 1–0 home win against Swansea City. Arteta scored his first Premier League goal for Arsenal in a 4–3 loss against Blackburn Rovers at Ewood Park.[9] He scored his second goal for the club in a 3–0 home win against West Bromwich Albion as he begins to comfortably settle into his playmaking role at his new club.[10]

Mikel Arteta is eligible for the Basque Country and the Spanish national football teams. The Basque team are not affiliated to FIFA or a regional confederation but play exhibition games. Arteta has played for Spain at Under 16, Under 17, Under 18 and Under 21 levels but has not played for the full international team. He represented Spain in the U16 European Championships, UEFA-CAF Meridian Cup, FIFA U17 World Cup and captained Spain in the U21 European Championships qualifying campaign.

In August 2010, several British news organisations erroneously reported that Arteta would be eligible to play for the England national football team due to his eligibility for a British passport. The player is not eligible for England because FIFA Statutes stipulate that the player needs to have held a British passport at the time when he represented Spain at the U16 European Championships and in addition he would have required five years of education in Britain before turning 18.[11][12]

In November 2011, Arteta reiterated his desire to one day represent his country at International level. "It’s one of my targets and I won’t stop going for it because I really want to represent my country". He went on to praise the current Spanish midfield as "the best midfield the world has ever seen".[13]

While initially thought of as a "pivot" or defensive midfielder in the mould of his hero Josep Guardiola,[14] it is only since being moved to a more attacking role by David Moyes that Arteta's career has truly begun to flourish. Although he achieved moderate success from central midfield with PSG and Rangers, his move to a more attacking role saw him rated as the sixth most effective player in the Premier League in 2006–07 by the official player ratings system the Actim Index.

His style of play is characterised by excellent close control and dribbling, which coupled with short bursts of acceleration allows him to eliminate defenders with relative ease. [15][16]

With 100 fouls committed against him in the 2006/07 season he was the most fouled player in the Premier League.[17]

Additionally, he has proved an extremely potent creative force thanks mainly to his pinpoint crossing ability and propensity for the killer pass, with his total of 12 league assists in the 2006–07 season being second to Cesc Fàbregas and Cristiano Ronaldo. [18]

Arteta although believed to be right footed has himself said that he considers his left foot to be the stronger.[citation needed]

Statistics accurate as of 11 October 2011

Arteta's wife is the former Miss Spain Lorena Bernal.[19] with whom he has a son. He is close friends with Xabi Alonso, who plays for Real Madrid. The two used to be neighbours at Liverpool's Albert Dock apartment complex.[19]

Arteta is multilingual, speaking fluent Spanish, Basque and Catalan. He speaks English and some French and Italian. He is also learning Portuguese.[20]