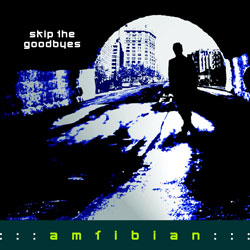 "Skip the Goodbyes" is the second album from , led by lyricist Tom Marshall and guitarist Anthony Krizan. Marshall and Krizan are the only surviving members from the last album "" Phish leader plays lead guitar on the title track. Former Amfibian member Chris Metaxas plays on the album as well.This is the first album released on Relix Records, a label founded by Magazine in 2007.