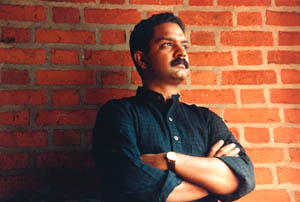 Sreevalsan J Menon is an n vocalist and a from . After initial training under Rajalakshmi Krishnan (disciple of ) and violinist T.V. Ramani at , he had much of his advanced tutelage under the late . Sreevalsan is an 'A' grade artist of and has given concerts all over the country including the National Concerts of AIR and . He has received several awards from the , and a title from Krishna Gana Sabha, also in Chennai, besides such institutions of repute in the . He has also participated in Music Transcends, a symphony held at Washington DC in 2004, integrating and Indian classical music. His s with vocalist and late musicians and have been widely appreciated.

Sreevalsan's music albums are fresh and innovative. They include Vanaprastham, a musical interpretation of the famous short story by ; "Monsoon Anuraga" a musical experience on rains. "Vismaya", a fantasy video album featuring "Artist Namboodiri", M T Vasudevan Nair and Sreevalsan himself.

He has given Carnatic vocal performances and lecture demonstrations throughout India, the Middle East, USA, Canada and Africa.

Currently, he works as associate professor at the Kerala Agricultural University in Thrissur, and is a Ph D in Agricultural Extension from IARI, New Delhi. (He earned his doctorate with research on the social impact of rubber cultivation.) A native of Thathamangalam in district, Sreevalsan currently lives in the temple town of off .