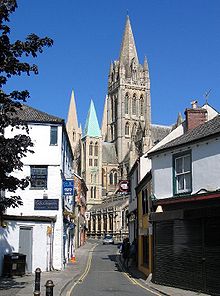 The Diocese of Truro is a Church of England diocese in the Province of Canterbury.

The diocese's area is that of the county of Cornwall including the Isles of Scilly. It was formed on 15 December 1876 from the Archdeaconry of Cornwall in the Diocese of Exeter, it is thus one of the younger dioceses.[1] However, the Christian faith has been alive in the region since at least the 4th century AD—more than 100 years before there was an Archbishop of Canterbury. Many of the communities in the diocese, as well as the parish churches, bear a Celtic saint's name, which is a reminder of the links with other Celtic lands, especially Ireland, Wales and Brittany.

The Diocese of Truro is involved directly and indirectly through its Board of Social Responsibility and in the life of its parishes in tackling some of the economic problems that Cornwall is wrestling with and works closely with statutory and voluntary agencies. There are 313 church buildings—visible signs of the involvement and commitment to serve the people of Cornwall.

The diocese is divided into two archdeaconries:

The names of the older deaneries (before 1875) are based on those of the ancient hundreds though the boundaries do not always correspond. East and West (Wivelshire) must have originally had a Cornish name but it is not recorded (Wivel may be from an Anglo-Saxon personal name 'Wifel').[5]

The deaneries created in 1875 in the episcopate of Frederick Temple were Bodmin, Stratton, St Austell, and Carnmarth. These remained unchanged until Carnmarth was divided; later still in the 1980s some alterations of boundaries occurred. The need for smaller deaneries was caused by the economic growth of Victorian Cornwall, mainly in tin and copper mining, which increased the population and by a greater effort by the church to encourage church membership.[6]

The arms of the diocese include a saltire gules on which are a crossed sword and key: below this is a fleur de lys sable, all surrounded by a border sable charged with 15 bezants. The saltire is the cross of St Patrick, taken to be the emblem of the Celtic church; the sword and key are emblems of St Peter and Paul, the patrons of Exeter Cathedral, and the fleur de lys represents St Mary, patron of the cathedral. The border is derived from the arms of the Duchy of Cornwall.[7] They were designed by the College of Heralds in 1877 and are blazoned thus:

"Argent, on a saltire gules, a key, ward upward, in bend, surmounted by a sword, hilt upward, in bend sinister, both or. In base, a fleur de lys sable. The whole within a bordure sable, fifteen bezants. Ensigned with a mitre."[8]

In 2003 a campaign group was formed called Fry an Spyrys (free the spirit in Cornish) [1] which is dedicated to disestablishing the Church of England in Cornwall and to reconstituting the Diocese of Truro as an autonomous province of the Anglican Communion. Its most vociferous member is the founder, the Revd Andy Phillips, who also writes under the pen-name An Bucca. Its chairman is Garry Tregidga of the Institute of Cornish Studies. Phillips states there has been constant speculation that the diocese might be merged back into the Diocese of Exeter for budgetary reasons.[citation needed]

The possibility of a merger was aired unofficially in March 2003, during debate surrounding the formulation of the Dioceses, Pastoral and Mission Measure, which would allow diocesan commissions to make proposals for the reorganisation of dioceses, including their dissolution. However, such a merger has yet to be proposed by any official body within the Church of England. When the possibility was raised by Fry an Spyrys in 2004 it was denied by a Church of England spokesman and also by representatives of the Truro and Exeter dioceses [9] Since then the Diocese of Truro has shown some financial and administrative resilience. Diocesan reorganisation and the 'People of God' campaign rallied human resources and led (by 2007) to a tight but stable financial situation. More recently Lord Lloyd of Berwick, who chairs Parliament's Ecclesiastical Committee, reported to the House of Lords that there are no plans to abolish the Diocese of Truro and to merge it with the Diocese of Exeter.[10]