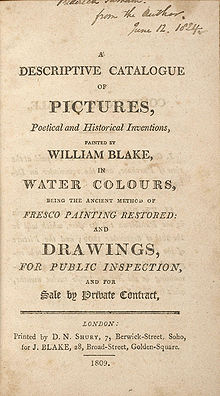 The title page of the Descriptive Catalogue

The Descriptive Catalogue of 1809 is a description of, and prospectus for, an exhibition by William Blake of a number of his own illustrations for various topics, but most notably including a set of illustrations to Chaucer's Canterbury Tales, this last being a response to a collapsed contract with dealer Robert Cromek.

Having conceived the idea of portraying the characters in Chaucer's Canterbury Pilgrims, Blake approached Cromek with a view to marketing an engraving. Knowing that Blake was too eccentric to produce a popular work, Cromek promptly commissioned Thomas Stothard to execute the concept. When Blake learned that he had been cheated, he broke off contact with Stothard, formerly a friend. He also set up an independent exhibition in his brother's haberdashery shop at 27 Broad Street in the Soho district of London. The exhibition was designed to market his own version of the Chaucer illustration, along with other works. As a result he wrote his Descriptive Catalogue of 1809, which contains what Anthony Blunt has called a "brilliant analysis" of Chaucer. It is regularly anthologised as a classic of Chaucer criticism.[1] It also contained detailed explanations of his other paintings.

The Preface to the Catalogue begins with a diatribe against "the Venetian" Correggio and Titian. It concludes (using the conventional spellings of his day):

Colouring does not depend on where the Colours are put, but on where the lights and darks are put, and all depends on Form or Outline, on where that is put; where that is wrong, the Colouring never can be right; and it is always wrong in Titian and Correggio, Rubens and Rembrandt. Till we get rid of Titian and Correggio, Rubens and Rembrandt, We never shall equal Rafael and Albert Durer, Michael Angelo, and Julio Romano.

Although now lost, The Ancient Britons was the most sensational of the works displayed and with dimensions of some 10 ft by 14 ft, was the largest work ever executed by Blake. The painting depicted the last battle of King Arthur against the Romans.

The exhibition was very poorly attended, with none of the temperas or watercolours sold and was described as "a dead failure". There was ony one review, in The Examiner, which was hostile.

Between April and October 2009 many of the works displayed at the original exhibition were put on display together once more at Tate Britain.[2]

The Index to the Catalogue is as follows:-