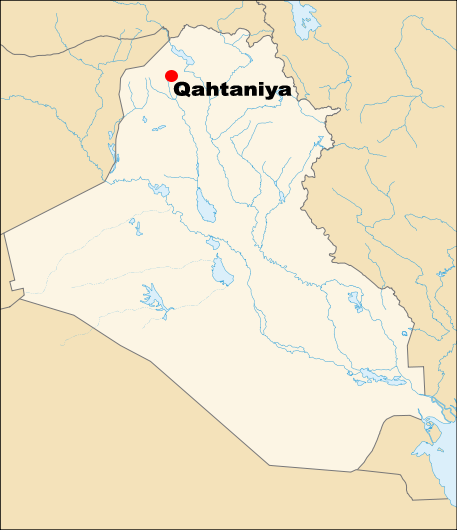 caption=Location of Qahtaniya in Iraq
location= and Jazeera,
target=Yazidis
date=,
time-begin=
time-end=
timezone=+3
type=s
fatalities=796The 2007 Yazidi communities bombings occurred at around 8pm local time on , , when four co-ordinated suicide bomb attacks detonated in the i towns of and (Siba Sheikh Khidir), near . 's estimates say the bombs have killed 796 and wounded 1,562 people, [ [http://www.nytimes.com/2007/08/22/world/middleeast/22iraq-top.html?_r=1&hp&oref=login Damien Cave and James Glanz, "Toll in Iraq Truck Bombings Is Raised to More Than 500", "New York Times" (August 21, 2007).] ] which would make this the 's most deadly car bomb attack to date.

The blasts targeted a Kurdish religious minority, the .

"Hospitals here are running out of medicine. The pharmacies are empty. We need food, medicine and water otherwise there will be an even greater catastrophe," said Abdul-Rahim al-Shimari, mayor of the Baaj district, which includes the devastated villages. [ [http://www.usatoday.com/news/world/iraq/2007-08-16-iraq-thursday_N.htm Associated Press, "Shiites, Kurds form alliance", "USA Today" (Aug. 16, 2007.] ]

On , the U.S. military reportedly killed the mastermind of the bombings, . [ [http://afp.google.com/article/ALeqM5iuVsyU3hMlrjfbAiWbU45y1bgPOQ AFP: Qaeda militant behind deadliest Iraq attack killed: US] ]

There have been tensions in the area in recent months, particularly between Yazidis and Muslims. Prior to the attack, some Yazidis living in the area received threatening letters calling them "infidels". [ [http://edition.cnn.com/2007/WORLD/meast/08/15/iraq.main/index.html?iref=topnews Arwa Damon, Mohammed Tawfeeq and Raja Razek, "Iraqi officials: Truck bombings killed at least 500," CNN.com] ] Leaflets were also distributed denouncing Yazidis as "anti-Islamic" and warning them that an attack was imminent. [ [http://www.npr.org/templates/story/story.php?storyId=12800852 NPR: General Calls Attack on Yazidis 'Ethnic Cleansing' ] ] [ [http://news.bbc.co.uk/2/hi/middle_east/6947716.stm BBC NEWS | Middle East | Minority targeted in Iraq bombings ] ]

Some sources have theorized that the attack might be connected to an incident wherein , a Yazidi teenage woman, was stoned to death. Aswad had allegedly wanted to convert to in order to marry a man. [ [http://www.timesonline.co.uk/tol/news/world/iraq/article2284302.ece Survivors of bombs left to die in rubble - Times Online ] ] Two weeks later, after a video of the stoning appeared on the Internet, Sunni gunmen [ [http://www.nytimes.com/2007/08/15/world/middleeast/15cnd-iraq.html Stephen Farell, "Death Toll in Iraq Bombings Rises to 250", "New York Times" (August 15, 2007).] ] stopped minibuses filled with Yazidis; 23 Yazidi men were forced from a bus and shot dead.

The area which has a mixed population of , Turkmen and is scheduled to vote in a plebiscite on accession to the Kurdish region in December 2007. This has caused hostility among the neighbouring Arab communities. A force of 600 Kurdish have since been deployed in the area, and ditches have been dug around Yazidi villages to prevent further attacks. [ [http://www.npr.org/templates/story/story.php?storyId=14968025&sc=emaf NPR: Yazidis Live Among Reminders of Deadly Attack ] ]

*flagcountry|Iraq: President , who is also Secretary General of the and an Iraqi of the Sunni sect of the Muslim faith, described the attacks as a "cowardly terrorist act". Talabani also blamed the bombings on Iraqi Sunni Muslim Arab insurgents looking to cause havoc in a largely secure part of the nation. [ [http://english.aljazeera.net/NR/exeres/00A2C79C-90C2-419F-8546-0AA58ADC1335.htm "Killings stoke tension in Iraq city", "AlJazeera.net" (August 12, 2007).] ]
* condemned the attacks through a press release, saying, "Nothing can justify such indiscriminate violence against innocent civilians". Ban also urged "Iraqi leaders, regardless of their political or religious affiliations, to work together to protect civilian lives and to dedicate themselves towards a meaningful dialogue aimed at ending the violence and achieving lasting national reconciliation". [ [http://www.un.org/apps/news/story.asp?NewsID=23514&Cr=iraq&Cr1= UN calls on Iraqi leaders to set aside religious differences after deadly car blasts ] ]
*flagcountry|United States: American spokespersons have called the bombings "barbaric". In a statement, the insisted US forces and the Iraqi government would continue to "beat back" the "vicious and heartless murderers".
*flagcountry|United Kingdom: Foreign Secretary said in a press statement: "The reports of the violence in Northern Iraq, whose origin has not yet been established, are a murderous blow against the Iraqi people by those who seek only destruction. [ [http://news.sky.com/skynews/article/0,,30200-1279899,00.html?f=rss Suicide Bombings Kill 250 In Iraq |Sky News|World News ] ]
*flagicon|Iraqi Kurdistan : Representatives of the [ [http://www.krg.org/ Kurdish Regional Government website] ] to the North claimed the attack could have been averted if the area had been controlled by Kurdish security.