God Put a Smile upon Your Face

God Put a Smile upon Your Face

Single infobox | Name = God Put a Smile upon Your Face 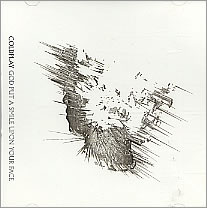 "God Put a Smile upon Your Face" is a song by English band . It was written by all members of the band for their second album, "". The song is built around an acoustic and electric guitar sound, that accompanies it with an uptempo drumming. The song was released in July 14, 2003 as the fourth single from "A Rush of Blood to the Head".

When writing "God Put a Smile upon Your Face" Martin said: "That came out of playing live and wanting to have something with a bit more bounce. We were really getting into things like and Muse – things with a bit more energy." [cite web|url=http://www.coldplay.com/content/ezine/documents/ezine6.pdf|title=Coldplay E-Zine: Issue 6|accessdate=2008-08-31|publisher="coldplay.com"|format=]

When asked about the development of the song, during a track-by-track reveal, said: "When we came to record it in the studio we struggled because there was something just not quite right about it and I wasn't happy about where we'd left it and where we were happy to leave it and we couldn't put our finger on what it was and so it was a really nice day one day, me and Chris were just trying, I was actually just trying to record bass at the time and me and Chris were just sitting down trying to brainstorm it and work out what was wrong and so I started trying to just do a few different bass lines and stuff. Between the two of us we came up with just this kind of groove, which stays on the same note as opposed to change, it's quite technical but it kind of added a bit of bounce to the song and it made it roll along in a much more fluid way. It was a bit mechanical before and it's just interesting how something small like that can really change the whole vibe of a song. It was just nice because from there on it was one of our favourite tracks and it almost didn't get on the record but it's now one of our favourite tracks." [cite web|first=Will|last=Jenkins|url=http://www.2-4-7-music.com/searches/index.asp?ArtistName=Coldplay|title=Coldplay Interview|accessdate=2008-09-02|date=2002-09-08|work=Crud Magazine]

The song features an acoustic and electric guitar sound. The song starts with a hushed acoustic ballad, the song then builds into a roar of an electric guitar and soaring with vocals. [cite web|first=Neva|last=Chonin|url=http://www.sfgate.com/cgi-bin/article.cgi?file=/chronicle/archive/2002/08/20/DD61861.DTL|title=Coldplay opens up vast yet intimate world|accessdate=2008-09-03|date=2002-08-20|work=] The song also includes an uptempo metronomic drumming rhythm. [cite web|first=David|last=Cheal|url=http://www.telegraph.co.uk/arts/main.jhtml?xml=/arts/2006/10/12/nosplit/bmplay12.xml|title=Perfect Playlist: Coldplay|accessdate=2008-09-02|date=2006-10-12|work=] [cite web|url=http://www.sputnikmusic.com/album.php?albumid=547|title=Coldplay - A Rush Of Blood To The Head Review|accessdate=2008-09-03|publisher=Sputnik Music]

The was released in October 2003, [cite web|url=http://www.mvdbase.com/video.php?id=37853|title=Coldplay - "God Put a Smile upon Your Face"|accessdate=2008-09-04|publisher=Mvdbase.com] and features a narrative theme. The video opens in a black-and-white feature, then intercuts a performance of the band footage with the story of a businessman who is humiliated and horrified to find that he is gradually disappearing after bumping into a mysterious stranger with no shoes. The businessman is played by actor . The band collaborated once more with director , who previously directed the band's third video "The Scientist". [cite web|author=MTV News staff report|url=http://www.mtv.com/news/articles/1473802/20030715/puff_daddy.jhtml|title=For The Record: Quick News On P. Diddy And Hammer, Ja Rule, White Stripes, Coldplay, Joe Strummer, Shakira & More|accessdate=2008-09-05|date=2003-07-15|publisher=]

Critics were positive towards the song. In the "" review of the album, critic Rob Sheffield wrote: "'God Put a Smile Upon Your Face' is the slinkiest and best thing Coldplay have ever done." [cite web|first=Rob|last=Sheffield|url=http://www.rollingstone.com/artists/coldplay/albums/album/171751/review/5943034/a_rush_of_blood_to_the_head|title=Coldplay: A Rush Of Blood To The Head Review|accessdate=2008-08-31|date=2002-08-26|work=] Adrien Begrand of wrote: "Buckland's lead fills highlight the wondrous 'God Put a Smile on Your Face', as the song's chorus reaches heights that rival those of their fellow countrymen Doves." [cite web|first=Adrien|last=Begrand|url=http://www.popmatters.com/music/reviews/c/coldplay-rush.shtml|title=Coldplay: A Rush of Blood to the Head|accessdate=2008-08-31|date=2002-09-06|publisher=] Ted Kessler of "" wrote: "Over a pounding garage tattoo Martin poses a deep, mortality-based teaser ("where do we go from here?"), asserts some self-belief ("God gave me style, God gave me grace") and then hits upon the bottom line as the song's mood suddenly improves with another fat and glorious chorus: "Yeah, when you work it out I'm the same as you....your guess is as good as mine". [cite web|first=Ted|last=Kessler|url=http://www.nme.com/reviews/coldplay/6656|title=Coldplay: A Rush Of Blood To The Head Review|accessdate=2008-08-31|date=2002-08-22|work=]