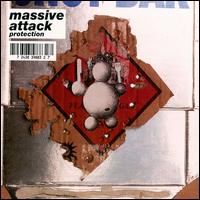 "Protection" was featured in the top ten of "" magazine's 'Coolest Albums of All Time List,' calling it "great music for when you're driving around a city at 4 am," due to the 'chill out' nature of the album. Like most of Massive Attack's albums, the music often defies quick categorization, ranging from R&B (title track, Sly) to hip hop/rap (Karmacoma, Eurochild) to -tinged (Spying Glass) to classical-influenced instrumentals (Weather Storm, Heat Miser). This album in particular has a heavy use of string instruments (or at least synthesizers imitating string instruments) compared to other albums, although certain tracks before and after have featured strings, like "" and "Live with Me".

It is also listed in the book '1001 Albums You Must Hear Before You Die'.

The track "" featured vocals from , and the video was directed by . The song also features a sample from the track "Dream Time in Lake Jackson" by , which can be found 2:00 minutes in.

DJ remixed the album in 1995 under the name "No Protection".