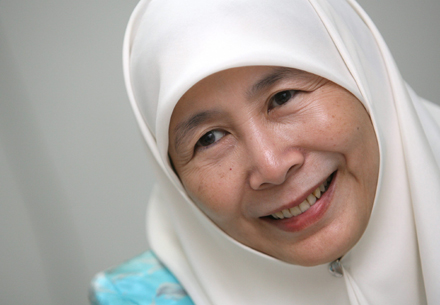 Born in 1952, Wan Azizah received her early education in St. Nicholas Convent School, . She was to continue her education at the prestigious Tunku Kurshiah College [http://www.tkc.edu.my/] in . She went on to study medicine at the where she was awarded a gold medal in and and she later graduated as a qualified .

Dr. Wan Azizah served as a government doctor for 14 years before deciding to focus on work, when her husband, was appointed the Deputy Prime Minister of Malaysia in 1993. As part of her voluntary pursuits, she became a patron of ("Majlis Kanser Nasional" or "National Cancer Council") in that period [Parti Keadilan Rakyat : [http://en.keadilanrakyat.org/index.php?option=com_content&task=view&id=13&Itemid=30 Datin Seri Dr Wan Azizah Wan Ismail] ] [Asiaweek : [http://www.asiaweek.com/asiaweek/magazine/99/1231/year.azizah.html A Woman of Grace] ] and became the second woman to lead a political party in Malaysia's history (Ganga Nayar founded and became the first president of the in 1978 [Bernama Library & Infolink Service : [http://blisdemo.bernama.com/makearticle.phtml?SN=0e273ec6447607fbf8650ea2f365c258&s=11&p=708&SN=0e273ec6447607fbf8650ea2f365c258 Ganga Nayar Profile] ] ).

Wan Azizah had a (Straits Chinese) grandfather but identifies as a Malay Muslim. [cite news|url=http://www-cgi.cnn.com/ASIANOW/asiaweek/99/0604/nat2.html|title=Readying for Elections?|last=Healy|first=Tim|coauthors=Oorjitham, Santha|date=2000-11-30|work=|accessdate=2007-09-26]

Following the dismissal and arrest of her husband on , Dr. Wan Azizah earned the respect and admiration of many Malaysians as the leader of the fledgling Reformasi movement. She first led the Social Justice Movement (ADIL), a , before helping to establish the on . The establishment of the party saw Dr. Wan Azizah being elected as the first party president [Parti Keadilan Rakyat : [http://en.keadilanrakyat.org/index.php?option=com_content&task=view&id=22&Itemid=32 Background & History] ] .

On , she brought the party into a merger with the older (or "Parti Rakyat Malaysia") which saw the establishment of the and was elected as the president of the newly merged party.

In the first elections competed by the party in 1999, she led the party to win 5 seats in the Parliament and was herself elected as the Member of Parliament for Permatang Pauh; the seat formerly held by Anwar Ibrahim; with a majority of 9,077 votes. She successfully retained the seat in the 2004 elections with a reduced majority [Malaysian General Election 2004 : [http://mypolitician.com.my/index2004.php?page=map/pulaupinang#P44b Results for Permatang Pauh] ] .

As a political party leader and also a parliamentary representative, Dr. Wan Azizah is involved in many programs and activities domestically and internationally. She has spoken at UN-sponsored programs, and the local and international media. She is also the Vice-Chair of the Malaysian Parliamentary Caucus for Democracy in Myanmar and a member of the ASEAN Inter-Parliamentary Myanmar Caucus [ASEAN Inter-Parliamentary Myanmar Caucus [http://www.aseanmp.org/index.php?option=com_content&task=view&id=123&Itemid=27] ] .

Dr. Wan Azizah won her parliament seat of in the 2008 12th General Election of Malaysia with a majority of 13,388 [Malaysian General Election 2008 : [http://mypolitician.com.my/indexpru.php?page=map2/pulaupinang#P44b Results for Permatang Pauh] ] . She was supported by all the component parties of to lead the opposition in the lower house of parliament, House of Representatives.

With the recent public announcement by Anwar Ibrahim regarding his intention to return to active politics despite being legally barred from doing so, [Radio Australia : [http://www.radioaustralia.net.au/asiapac/programs/s1869902.htm MALAYSIA: Anwar Ibrahim to make political comeback] ] Dr Wan Azizah has indicated her readiness to vacate the position of party president if he was elected. [Daily Express : [http://www.dailyexpress.com.my/news.cfm?NewsID=47936 Wan Azizah agrees to make way for Anwar] ] Nonetheless, she has also indicated that she intends to defend her parliamentary seat for Permatang Pauh. [Malaysiakini : [http://www.malaysiakini.com/news/64598 She's ready to make way for hubby] ]

No confidence motion towards government premiership

On , Wan Azizah in her capacity as the submitted an urgent motion of "no-confidence" in Prime Minister Datuk Seri , on behalf of the Pakatan Rakyat (PR) MPs. The reasons she cited were the narrow victory of Barisan Nasional in the March general election, the sudden fuel price hike, the marginalization of PR-led states and the alleged oppression of BN MPs to voice up, had led to the confidence crisis against the prime minister. [ [http://www.malaysia-today.net/index.php?option=com_content&task=view&id=9753&Itemid=1 Wan Azizah files emergency motion of "no confidence" in PM; Speaker to decide on Monday ] ]

Wan Azizah was honored on the occasion of the official birthday of the (State Governor) of on July 12 when she was awarded the (Order of the Defender of the State), a of the second rank in the state. The award carries the non-hereditary of .