The Demon core was the nickname given to a 6.2-kilogram (14 lb) subcritical mass of plutonium that accidentally went briefly critical in two separate accidents at the Los Alamos laboratory in 1945 and 1946. Each incident resulted in the acute radiation poisoning and subsequent death of a scientist. After these incidents, the sphere of plutonium was referred to as the Demon Core.

The core was used in an atomic bomb test in 1946, five weeks after the second fatal accident, and proved in practice to have a slightly increased yield over similar cores which had not been subjected to criticality excursions. 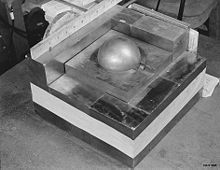 A re-creation of the 1945 incident. The sphere of plutonium is surrounded by neutron-reflecting tungsten carbide blocks.

On August 21, 1945, the plutonium core produced a burst of neutron radiation that caught Harry Daghlian in its path. Daghlian was a physicist who made a mistake while working alone performing neutron reflection experiments on the core. The core was placed within a stack of neutron-reflective tungsten carbide bricks, and the addition of each brick moved the assembly closer to criticality. While attempting to stack another brick around the assembly Daghlian accidentally dropped it onto the core and thereby caused the core to go critical. Despite quick action in moving the brick off the assembly, Daghlian received a fatal dose of radiation. He died 25 days later from acute radiation poisoning.

Another person who was in the lab at the time of the accident—Private Robert J. Hemmerly, a Special Engineer Detachment (SED) guard—received an exposure of approximately 31 roentgens of soft X-rays (80 kV equivalent) and less than 1 roentgen of gamma rays. Hemmerly died in 1978 (33 years after the accident) from acute myelogenous leukemia at the age of 62. 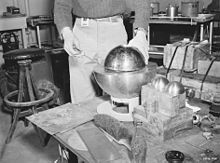 A re-creation of the 1946 incident. The half-sphere is seen but core inside is not. Note the beryllium hemisphere held up with a screwdriver.

On May 21, 1946,[1] physicist Louis Slotin and seven other scientists were in a Los Alamos laboratory conducting an experiment to verify the exact point at which a subcritical mass (core) of fissile material could be made critical by the positioning of neutron reflectors. The test was known as "tickling the dragon's tail" for its extreme risk. It required the operator to place two half-spheres of beryllium (a neutron reflector) around the core to be tested and manually lower the top reflector over the core via a thumb hole on the top. As the reflectors were manually moved closer and farther away from each other, scintillation counters measured the relative activity from the core. Allowing them to close completely would result in the instantaneous formation of a critical mass and a lethal power excursion. Under Slotin's unapproved protocol, the only thing preventing this was the blade of a standard flathead screwdriver, manipulated by the scientist's other hand. Slotin, who was given to bravado, became the local expert, performing the test almost a dozen separate times, often in his trademark bluejeans and cowboy boots, in front of a roomful of observers. Enrico Fermi reportedly told Slotin and others they would be "dead within a year" if they continued performing it.[2]

While lowering the top reflector, Slotin's screwdriver slipped a fraction of an inch, allowing the top reflector to fall into place around the core. Instantly there was a flash of blue light and a wave of heat across Slotin's skin; the core had become supercritical, releasing a massive burst of neutron radiation. He quickly knocked the two halves apart, stopping the chain reaction and likely saving the lives of the other men in the laboratory. Slotin's body positioning over the apparatus also shielded the others from much of the neutron radiation. He received a lethal dose in under a second and died nine days later from acute radiation poisoning. The nearest physicist to Slotin, Alvin C. Graves, was watching over Slotin's shoulder and was thus partially shielded by him, receiving a high but non-lethal radiation dose. Graves was hospitalized for several weeks with severe radiation poisoning, developed chronic neurological and vision problems as a result of the exposure, suffered a significant shortening of his lifespan and died of a radiation-induced heart attack 20 years later. The other six people in the room were far enough away from the assembly to avoid fatal injury, but they all suffered other complications as a result of the accident. Two people suffered severe shortening of their lives and died years later from radiation induced complications: leukemia (at age 42, 18 years after the accident) and clinical aplastic anemia.[3][4][5]

Demon core in use 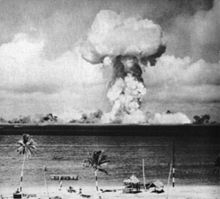 The Demon core was put to use for the Able detonation test of the Crossroads series on July 1, 1946, demonstrating that the criticality experiments of Daghlian and Slotin increased the efficiency of the weapon.[6]

Charles Stross refers to the Daghlian incident in his novel The Atrocity Archives, specifically in the included short novel by similar title[citation needed].

The 1989 film Fat Man and Little Boy portrays, in a character named Michael Merriman (played by John Cusack), a fictional composite of Harry K. Daghlian and Louis Slotin. The character dies of radiation poisoning after two hemispheres of fissile material, which are separated by a screwdriver, connect accidentally.

Joseph Kanon recounts events surrounding the first criticality accident, "Tickling the tail of the sleeping dragon [...] Testing how far we can go," in his 1997 novel Los Alamos.[7]