The Army Parachutist Badge is awarded to all military personnel of any service who complete the US Army Basic Airborne Course at Fort Benning, Georgia. It signifies that the soldier is a trained Army Parachutist, and is qualified to participate in airborne operations.

To be eligible for award of the basic Parachutist Badge, an individual must have completed the Airborne School of the Infantry School in Fort Benning, GA.

To be eligible for the Senior Parachutist Badge, an individual must have been rated excellent in character and efficiency and have met the following requirements:

To be eligible for the Master Parachutist Badge, an individual must have been rated excellent in character and efficiency and have met the following requirements:

The 25 combat equipment jumps necessary to qualify for the Master Parachutist Badge must be from a static line. 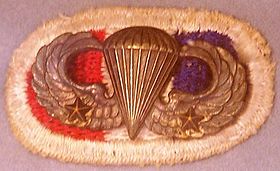 Soldiers who complete airborne jumps into combat zones can wear the appropriate-level Parachutist Badge (Basic, Senior, or Master) with a bronze star[2] (service star) for each jump, up to the authorized maximum of five (a single gold star).[3]

The Combat Parachutist Badge did not gain official (army-wide) approval until after the 1983 invasion of Grenada (Operation Urgent Fury).[4]

Army units with airborne status wear an oval embroidered background trimming underneath the parachutist badge,[5] sharing the basic design of the unit's beret flash.[6] The original flash was also a contribution of William P. Yarborough.

Training is accomplished by successful completion of the prescribed course of instruction while attending the:

The right to wear the Basic Parachute Insignia, which is a silver metal pin with an open parachute flanked on either side by wings that curve upward, is awarded to personnel who complete the prescribed training. MCO 3120.11 is the only current Naval doctrine dictating the minimum requirements for the Basic Airborne course of instruction.

When an enlisted member initially qualifies as a static-line parachutist, an entry shall be made on NAVPERS 1070/613 (commonly referred to as a "Page 13" entry) of the service record indicating the date of qualification, type(s) of aircraft in which qualified, and unit at which the training was received. Enlisted members are authorized the parachutist (PJ) designator added to their rating.

A qualified Static-Line Parachute Jumper who successfully completes the prescribed program of instruction while attending a formal, interservice training facility including a minimum of 10 military free-fall parachute jumps, at least 2 of which must have been conducted carrying full combat equipment (1 day/1 night), may qualify. Enlisted members are authorized the military free-fall parachutist (FPJ) designator added to their rating.

When an officer initially qualifies as a static-line parachutist, the additional qualification designator (AQD) of BT1 will be entered into the officer's record by their detailer (NAVPERS). Free-fall qualification will result in an AQD of BT2.

For both the Static-Line and Military Free-Fall Parachutist Jumper qualified personnel, a service record entry shall also indicate whether or not the member is HALO-qualified.

The Basic Parachutist Badge is a prerequisite for the Special Warfare Badge since parachutist training is an integral part of the Navy’s Basic Underwater Demolition/SEAL (BUD/S) program. SEAL personnel generally do not wear the Basic badge once they earn their Special Warfare insignia, but will wear their Naval Jump Wings in addition to the "Budweiser." Navy EOD technicians are generally also jump qualified with a number of them also being qualified in military free-fall (HALO/HAHO). Currently, due to a recent change, newly pinned EOD techs are required to attend Airborne School upon graduation. As well, a small number of SWCC personnel earn Basic badges in conjunction with their assignment to a Special Boat Team detachment that uses the Maritime Craft Air Delivery System (MCADS). This enables them to drop small watercraft and their crews from C-130 aircraft.

In 1963 Chief of Naval Operations Admiral George W. Anderson, on the recommendation by Major Bruce F. Meyers of the Marine Corps Test Unit, authorized the adoption of a new, distinctively naval badge modeled after the insignia of the Paramarines and naval aviation from World War II.[8]

Notes: Airborne RED HORSE consists of a limited number of personnel within selected squadrons and not the entire career field. Additionally, most aircrew equipment and physiology technicians do not attend Airborne training or serve on jump status.

The Air Force Basic Parachutist Insignia is similar in design to the Army Parachutist Badge. Air Force personnel may be awarded the decoration following completion of basic parachute training through a designated Air Force Air-Ground Training Program. Air Force personnel generally earn the basic parachutist badge either through the Army's Airborne School at Fort Benning, or through freefall parachute training at the Air Force Academy. The freefall program is offered to all Air Force Academy cadets (as well as some others) and, as a result, a large percentage of Air Force Academy graduates wear basic jump wings. The free fall course is designed for cadets to develop character, confidence, and courage. The jump wings awarded upon completion of the course are non-operational wings and are not recognized by other DoD jump units. If Air Force members are interested in pursuing a job requiring jump status they must attend the United States Army Airborne School.[9] [10]

The Air Force Senior Parachutist Insignia consists of the standard Air Force Parachutist with a star atop the parachute. Awarded for 35 static line jumps.

The Air Force Master Parachutist Insignia consists of the Senior Air Force Parachutist with a star centered within the wreath. Awarded for 65 static line jumps.