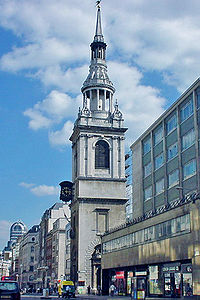 The Arches Court, presided over by the Dean of Arches, is an ecclesiastical court of the Church of England covering the Province of Canterbury. Its equivalent in the Province of York is the Chancery Court.

The Court of Arches is the provincial court for Canterbury. It has both appellate and original jurisdiction. It is presided over by the Dean of the Arches, who is styled The Right Honourable and Right Worshipful the Official Principal and Dean of the Arches. The dean must be a barrister of ten years' High Court standing or the holder or former holder of high judicial office. The appointment is made by the two archbishops jointly.

At various times the court has sat in the church of St Mary-le-Bow (Sancta Maria de arcubus, formerly the archbishop's principal peculiar in London), whose arches give the court its name; later in Doctors' Commons and also at 1 The Sanctuary, Westminster and St Paul's Cathedral. Its permanent home remains St Mary le Bow, where regular sittings include those to confirm the election of each new diocesan bishop in the province. The Provincial Registry is at 16 Beaumont Street, Oxford OX1 2LZ.

The proper jurisdiction of the court is only over the 13 peculiar (particular) parishes belonging to the archbishop in London. But, as the office of Dean of the Arches is united with that of Principal Official, the dean receives and determines appeals from the sentences of all lesser ecclesiastical courts within the province. Many original suits are also heard, where lesser courts waive jurisdiction by letters of request. Appeal lies with the Privy Council, except on matters of doctrine, ritual or ceremony, which go to the Court for Ecclesiastical Causes Reserved.

Original jurisdiction was formerly exercised by a separate provincial court, known as the Court of Audience.