Chessmaster is a chess playing computer game series which is now owned and developed by Ubisoft. It is the best-selling chess franchise in history, with more than five million units sold as of 2002[update].[1]

The King engine allows users to create new playing styles, also called "personalities", by manipulating several dozen different settings, such as King Safety, Pawn Weakness, Randomness, Mobility and others. Individual piece values can also be adjusted. Chessmaster 9000, for example, features over 150 different personalities ranging from International Grandmaster strength down to Stanley, who is described as a monkey and plays what are essentially random moves.

The personality feature has inspired many amateur computer chess enthusiasts to attempt to find more optimum personalities.In Chessmaster 10th Edition, the creation of new personalities has been made easier than before.

Chessmaster 9000 defeated then U.S. Chess Champion International Grandmaster Larry Christiansen in a four-game match held in September 2002.[6] Chessmaster won the match 2.5-1.5. The Chessmaster program was operated by John Merlino, the Project Manager of Chessmaster at the time of the match. Four different personalities were used in the match, the first three of which were based on famous human Grandmasters: Alexander Alekhine, Bobby Fischer, and Mikhail Botvinnik. The final game of the match used the default "Chessmaster" personality. Christiansen won the first game, lost the second and third games, and the fourth game resulted in a draw. 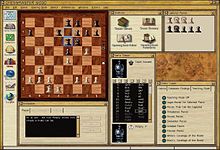 The more recent editions of Chessmaster include both 2D and 3D designs, and a large number of different boards and themed chess piece designs. The interface was revised for Chessmaster 10th Edition and features animated 3D sets[10][11] in which the pieces "walk" between squares and have simulated battles when a piece is taken, reminiscent of Battle Chess and the Harry Potter Wizards chess set. (Previous editions also feature fully 3D sets but are not animated and the pieces do not battle.) Chessmaster 10th Edition also comes packed with a pair of red and blue glasses to view the set in "enhanced 3D".[12]

This version of Chessmaster contained a bug allowing the white player to indefinitely hold up a match until a player resigned. The game was eventually patched so that neither player would gain or lose Elo points if they resign before the first move.

Critical reaction to the Chessmaster series has been mostly positive. GameSpot commented that "Chessmaster has remained the consummate standard in console chess games since the '80s."[13] IGN said that "the series itself remains the best way to play and learn about chess on the PC."[14]

Although the Chessmaster chess engine is generally not as strong as the engines of other commercially-available chess programs such as Fritz,[21][22] critics have praised the Chessmaster series for its comprehensive tutorials aimed at players of amateur and moderate skill levels. In its review of Chessmaster 9000, IGN said that "the series has always distinguished itself with first-rate chess teaching tools," and welcomed the game's "appeal towards inexperienced and mid-level players. With all manner of tutorials, detailed analysis and exercises, the game helps ease newbies into the experience."[23] GameSpot's review of Chessmaster 10th Edition commented positively on the game's "huge bundle of features aimed at everyone from the neophyte who's looking to learn the basics to the advanced wood pusher who may need practice for tournament play."[17]

A common criticism of the series has been the lack of new features in successive installments. IGN's review of Chessmaster 10th Edition commented, "it simply doesn't add enough over any of the last two versions to make it a necessary upgrade."[14]