West Dundee is a village in Kane County, Illinois, United States. The population was 7,975 as of July 2008.

West Dundee lies across the Fox River from East Dundee and Carpentersville.

The settlement started in 1835 when Elder John and Nancy Oatman established a tavern and a store. In 1837, a lottery was held among the settlers to determine who would name the town. Alexander Gardiner won and named the town Dundee in honor of his Scottish hometown. In 1843 Scotsman Allan Pinkerton, later the renowned detective, set up business as a cooper. The town was incorporated in 1867, four years before East Dundee.

Mark W. Fletcher laid out the original town of Dundee on the west bank of the Fox River in 1836 with a grid of streets,[2] but was hemmed in from development for years. The river formed a natural eastern barrier. Expansion to the north and west was blocked by the D. Hill Nursery. In the 1950s a segment of the Hill property East of Illinois Route 31 was sold and turned into the Highlands subdivision, which was annexed into West Dundee in 1956. The community also annexed property west of Illinois Route 31 in 1957, Royal Lane in 1960, and the Old World subdivision in 1966. The nursery eventually sold all of its land and moved to McHenry. Plans for the Spring Hill Mall on Hill's land began in 1973 and the project was completed in 1980. The 1,100,000-square-foot (100,000 m2) mall's retail sales boosted West Dundee's economy and created an estimated 1,600 jobs by 1982, but subsequently was eclipsed by larger and newer malls. The mall's owner, General Growth Properties, filed for bankruptcy in 2009.[3] West Dundee then annexed new subdivisions to the west of Spring Hill, but was again hemmed in by Elgin which incorporated land west of Sleepy Hollow Road. The remaining land south of Illinois Route 72 had been separately incorporated as Sleepy Hollow in 1958.

Over the years there have been efforts to merge West with East Dundee, the village just across the Fox River. A 1956 referendum was approved by East Dundee but rejected by West Dundee. West Dundee approved a 1962 referendum, but East Dundee rejected it. Each town's retention of individuality dates back to their early days, when West Dundee's Scottish and English heritage kept it apart from its German neighbors in East Dundee.[4] 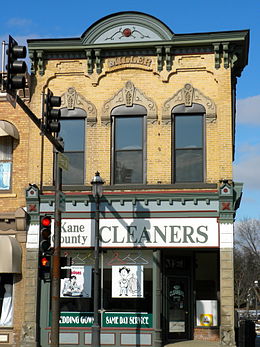 The Miller Building at First and Main

There were 2,059 households out of which 37.0% had children under the age of 18 living with them, 59.4% were married couples living together, 7.8% had a female householder with no husband present, and 29.4% were non-families. 24.3% of all households were made up of individuals and 8.3% had someone living alone who was 65 years of age or older. The average household size was 2.64 and the average family size was 3.18.