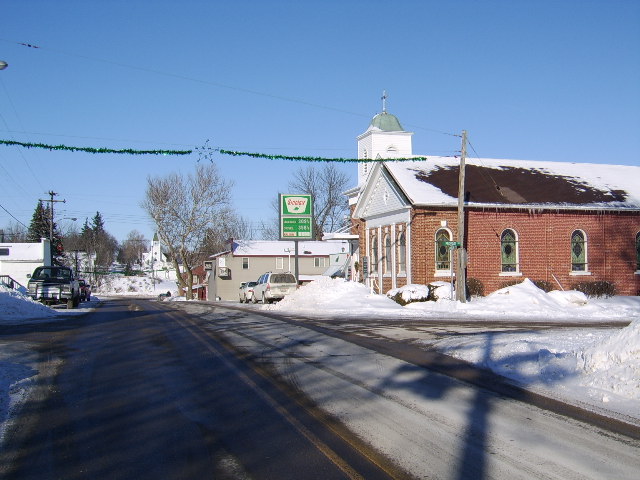 The original town of Scales Mound was located at the base of an erosional remnant similar to , about a mile southwest of the present-day village. In 1830 purchased the original village site from John Sole and built a tavern at the base of the mound along Sucker Trail, a major east-west corridor. The land that the present-day village of Scales Mound is on was purchased from the U.S. government in 1848 by a man named Dunning. Little is known about Dunning or the use of the land until the 1850s.

In 1851 the (ICRR) was established and it would become a major factor in the settlement of much of rural Illinois, including Scales Mound. In September 1853, anticipating the arrival of the railroad, the village of Scales Mound was platted by Josiah Conlee and B.B. Provost. During the summer of 1854 track crews from ICRR laid out convert|20|mi|km of track between Scales Mound and Apple River and trains were running the line the day after completion. With the arrival of the railroad, Scales Mound's first building was constructed in the late fall 1854; a store built by Sherman Eddy.

There were 164 households out of which 31.1% had children under the age of 18 living with them, 54.3% were married couples living together, 8.5% had a female householder with no husband present, and 34.1% were non-families. 32.3% of all households were made up of individuals and 18.3% had someone living alone who was 65 years of age or older. The average household size was 2.45 and the average family size was 3.08.

Scales Mound is located in a region of the U.S. Midwest known as the , so called because it escaped glaciation during the last ice age. Covering parts of Illinois, , and , the Illinois region is mostly limited to Jo Daviess County and small parts of Whiteside and Carroll County in northwest Illinois. The topography of the area is characterized by hilly terrain and wooded ridges. Common features found in the Scales Mound area include s, s, s and s.

Scales Mound has one K-12 school. Its mascot is the Hornets.