Jerseyville is a city in Jersey County, Illinois, United States. As of the 2010 U.S. census, the city had a total population of 8,465. It is the county seat of Jersey County[1], and is also the largest city in the county. The city's current mayor is Richard Perdun.

Jerseyville is a part of Southern Illinois, the Metro-East region, and the St. Louis Metropolitan Statistical Area.

According to the United States Census Bureau, the city has a total area of 4.4 square miles (11 km2). None of it is covered by water.

Typically, the city's climate reflects most Midwest cities, located in the transitional zone between the humid continental climate type and the humid subtropical climate type (Koppen Dfa and Cfa, respecively), with neither large mountains nor large bodies of water to moderate its temperature. Spring is the wettest season and produces severe weather ranging from tornadoes to snow or ice storms. Summers are hot and humid, and the humidity often makes the heat index rise to temperatures feeling well above 100 °F (38 °C). Fall is mild with lower humidity and can produce intermittent bouts of heavy rainfall with the first snow flurries usually forming in late November. Winters can be cold at times with periodic light snow and temperatures below freezing.

In 1827, James Faulkner, a Pennsylvania native, and his family built a small framed structure that was named the "Little Red House," in the area that is now known as Jerseyville. The "Little Red House" served as the first stagecoach station, first tavern, first school, and first bank in the immediate area. By 1834, the small settlement that grew up around Faulkner’s home, then known as Hickory Grove by its residents, was surveyed and platted by two immigrants from New Jersey, John Lott and Edward M. Daly. Lott and Daly’s involvement marked the beginning of a proportionally large number of merchants, businessmen and settlers from New Jersey. A meeting was called in that same year at the "Little Red House" to vote for a town name, so a post office could be established. The name of Jerseyville was chosen to honor the native state of many of its inhabitants.[4]

In 1839, Jersey County was formed out of Greene County and Jerseyville was named as its county seat. After the American Civil War ended, and the construction of the Alton & Chicago Railroad was completed, Jerseyville saw a period of commercial, industrial and urban growth. The first major period of growth in the city occurred from 1880 to 1916, and from that time to the present, Jerseyville's growth has since been steady and substantial. The majority of the commercial structures that are now located in the Downtown Historic District and Courthouse Square were built during this period. It was also during this time that the present Jersey County Courthouse was built. The two story, 124-foot-tall (38 m) Romanesque Revival building was completed in 1893, and is considered to be one of the most aesthetic courthouses in the area. Other nearby Victorian style buildings in the city include Queen Anne, Edwardian and Italianate architectural features, with several of these buildings having been recently renovated.[citation needed]

In recent decades, Jerseyville has been a testing ground in the agricultural biotechnology field. Monsanto owns and operates a facility located just south of the city, which in 1987, was the site of the world’s very first biotechnology field trial – first with tomatoes and later that year with soybeans. The facility was also home to the first triple stacked corn trial in 1998, which later became part one of Monsanto’s top-selling products. The facility was further expanded in 2008, and now consists of sixteen greenhouses and almost 300 acres of land for field testing.[5]

The Downtown Historic District is presently home to some antique stores and gift shops, a few clothing stores, two pharmacies, and several local restaurants and banks. Most of the growth that has occurred since the early 1990s has been in the southern and southwestern portions of the city, where new residential subdivisions and retail shopping centers have been built, and where numerous land annexations have been made by the city.[citation needed] 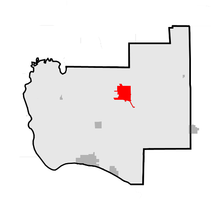 Location of Jerseyville within Jersey County

Jerseyville has a number of public and private schools. Public schools are part of Jersey Community Unit School District 100.

Schools in Jerseyville had a total combined enrollment of 2,720 students.[7]

Nearby colleges and universities include Principia College, in Elsah, and Lewis and Clark Community College, in Godfrey.

A four-lane expansion of US Highway 67 in Jerseyville has been in the planning stages for years, and is currently in Illinois' five-year road construction plan. The plan includes the Jerseyville Bypass, which is expected to go around the eastern portion of the city when it is completed. Construction of the bypass has not started yet, but all of the work prior to actual road construction is scheduled to be completed by 2012. This is a part of the completion of the entire US Highway 67 four-lane project in Illinois between Godfrey and the Quad Cities area.

Jerseyville was also a minor stopping point on the historic Underground Railroad. The “Little Red House” was utilized as a station for the Underground Railroad until the end of the Civil War and included a false cellar that was used to hide slaves searching for freedom.