The Argus As 014 (also known as the 109-014 by the RLM) was a pulse jet engine used on the German V-1 flying bomb of World War II, and the first model of pulsejet engine placed in mass production.

The origins of the Argus As 014 lie in 1928, when Munich inventor Paul Schmidt began work on a new design of pulse jet engine. Schmidt received a patent on his design in 1931 and received support from the German Air Ministry in 1933. In 1934, along with Professor Georg Madelung, Schmidt proposed a "flying bomb" to be powered by his pulse jet to the Ministry and received a development contract the following year. In 1938 he demonstrated a pulse jet–powered pilotless bomber, but the project was shelved by the Air Ministry as the prototype lacked range and accuracy and was expensive to construct. That same year, however, the Argus Company began work on a flying bomb using Schmidt's engine. Schmidt later joined Argus in 1940. License manufacture of the As 014 was carried out in Japan in the latter stages of World War II, as the Ka10.

A model of simplicity and low cost, the engine was made from a sheet of mild steel rolled into a tube. At the front of the engine there was a spring flap-valve grid (shutters), a fuel inlet valve and an igniter. It could run on any grade of petroleum fuel and its shutter system was not expected to last longer than one flight, as it had an operational life of approximately one hour. The engine was a resonant jet which, contrary to popular legend, could operate while the V-1 was stationary on its launch ramp.

Ignition was accomplished by an automotive-type spark plug located about 2.5 ft (0.76 m) behind the shutter system, electricity to the plug being supplied from a portable starting unit. Three air nozzles in the front of the pulse jet were connected to an external high pressure air source which was used to start the engine. Acetylene was used for starting, and very often a panel of wood or similar was held across the end of the tailpipe to prevent the fuel from diffusing and escaping before ignition was complete. 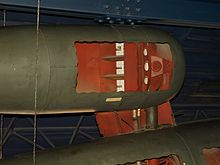 Sectioned AS 014 engine on display at the London Science Museum

Once the engine had been started and the temperature rose to the minimum operating level, the external air hose and connectors were removed and the resonant design of the tailpipe kept the pulse jet firing. Each cycle or pulse of the engine began with the shutters open; fuel was injected behind them and ignited, and the resulting expansion of gases forced the shutters closed. As the pressure in the engine dropped following combustion, the shutters reopened and the cycle was repeated, roughly 45 to 55 times per second. The electrical ignition system was used only to start the engine - a V-1 carried no coils or magnetos to power the spark plug once launched.

Since the engine was rather simple, low-grade gasoline could be used and a good amount of thrust — 2.7 kN (660 lbf) — was produced, but it was inefficient, limiting the range of the V-1 to 150–250 miles. The resonant frequency of this combustion process was around 45 Hz, giving the V-1 its nicknames "buzz bomb" or "doodlebug", because of the sputtering sound it emitted. The prototype engine was tested while slung below a Gotha Go 145 Luftwaffe training biplane in April 1941 and the first prototype V-1 flew on Christmas Eve of 1942. The As 014 was also under consideration as a power source for various last-ditch German fighters in the closing days of World War II. Production totaled 31,100 units.[1]

After the Second World War the As 014 was reverse-engineered / copied for use by the USA, as the Ford PJ31, on the JB-2 Loon, and the Soviet Union as the Chelomey D-3 on the 10Kh (Fieseler Fi 103 look-alike).

The Planes of Fame Aeronautical Museum in Chino, California, houses what is believed to be the only operational As 014 in the world. It was restored into full operational status sometime in 2005 and retains the original valve system. The engine was run on a trailer during the annual 2009 Planes of Fame air show, the engine was used to push the trailer and the truck towing it at a speed of around 30 mph.[original research?]

The V-1 flying bomb held by the London Science Museum features a sectioned As 014 engine, other museums displaying V-1s complete with their engines include the:

A captured and wingless Fi 103R with its As 014 installed