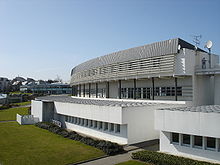 Picture of the school

It is situated in Cherbourg-Octeville.

The school is accredited by the "Commission des Titres" to deliver Engineering Degrees.

This school is now part of the ESIX Normandie.

The school have a unique specificity in France: there are some classes about "Contamination control". The meaning of Contamination control is to manufacture products with specific constraints like in there is in microelectronic, food-processing, nuclear and pharmaceutical industry.

But the career prospects of the school are wider : aerospace, general mechanic, automobile industry, ...

The school have agreements allowing students to attend semester(s) in foreign countries :