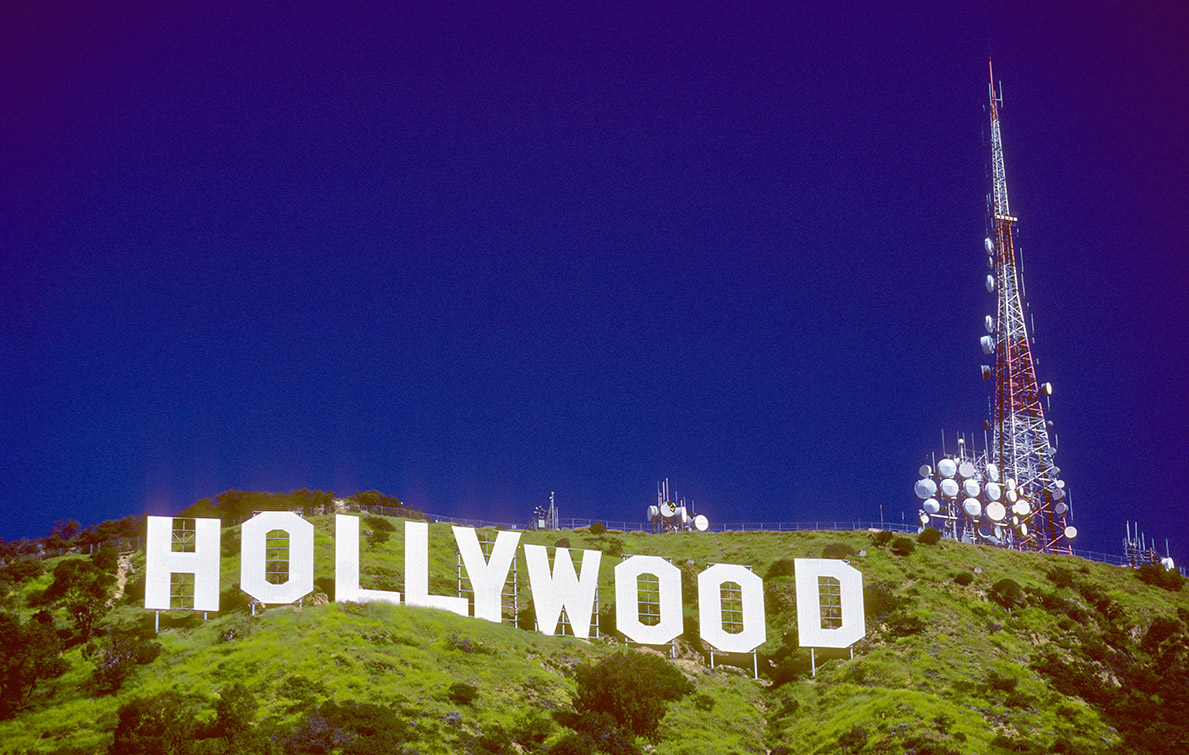 From the ground, the contours of the hills give the sign its well-known "wavy" appearance. When observed at a comparable altitude, the letters appear straight-across.

The sign makes frequent appearances in popular culture, particularly in establishing shots for s and s set in or around Hollywood, and for example in the background of the current CGI fanfare logo of . Signs of similar style, but spelling different words, are frequently seen as parodies.

The sign originally read "HOLLYWOODLAND", and its purpose was to advertise a new housing development in the hills above the district of Los Angeles. H.J. Whitley had already used a sign to advertise his development Whitley Heights, which was located between Highland Avenue and Vine Avenue. He suggested to his friend Harry Chandler, the owner of the "", that the land syndicate in which he was involved make a similar sign to advertise their land. Real estate developers Woodruff and Shoults called their development "Hollywoodland" and advertised it as a "superb environment without excessive cost on the Hollywood side of the hills." (A movie named "" was made in 2006.)

They contracted the Crescent Sign Company to erect thirteen letters on the hillside, each facing south. The sign company owner, (1890&ndash;1984) designed the sign. Each letter of the sign was 30 ft (9 m) wide and 50 ft (15 m) high, and was studded with some 4000 light bulbs. The sign was officially dedicated on , . It was not intended to be permanent. Some sourcesWho|date=June 2008 say its expected life was to be about a year and a half, but after the rise of the American cinema in Los Angeles it became an internationally recognized symbol, and was left there.

It became so associated with Hollywood that in September 1932, actress committed by jumping to her death from the letter "H", as she saw the sign as a symbol of the industry that had rejected her.Fact|date=June 2008

Official maintenance of the sign ended in 1939, and it rapidly began to deteriorate.

During the early 1940s, (the sign's official caretaker) caused an accident that destroyed the letter "H", [Summer 2006 edition of "The Beachwood Voice"] as seen in many historical pictures. Kothe was driving his car up to the top of Mount Lee drunk, lost control of the vehicle, and drove off the cliff behind the "H". While Kothe was not injured, the 1928 was destroyed, as was the letter.

In 1949, the Hollywood Chamber of Commerce began a contract with the City of Los Angeles Parks Department to repair and rebuild the sign. The contract stipulated that "LAND" be removed to spell "Hollywood" and reflect the city, not the "Hollywoodland" housing development. [cite news|url=http://www.npr.org/programs/morning/features/patc/hollywoodsign/index.html|title=The Hollywood Sign, Present at the Creation|date=, |publisher=NPR|] The Parks Department dictated that all subsequent illumination would be at the cost of the Chamber, so the Chamber opted not to replace the light bulbs. The 1949 effort gave it new life, but the wooden and sheet metal sign continued to deteriorate in the open air of the Hollywood Hills. Eventually the first "O" splintered and broke off, resembling a lowercase "u", and the third "O" fell down completely, leaving the severely dilapidated sign reading "HuLLYWOD".

In 1978, due in large part to the public campaign to restore the landmark by er (who donated the missing "O"), the Chamber set out to replace the intensely deteriorated sign with a more permanent structure. Nine donors gave $27,777 each (totaling $250,000) to sponsor replacement letters made of Australian steel, guaranteed to last for many years (see Donors section below).

Refurbishment, donated by Bay Cal Commercial Painting, [cite web|url=http://www.baycal.com/hsrp/index.html|title=Hollywood Sign Restoration Project 2005|accessdate=2008-01-01|publisher=Bay Cal Painting] began again in November 2005, as workers stripped the letters back to their metal base and repainted them white. Also in 2005, the original 1923 sign was put up for sale on eBay by producer/entrepreneur Dan Bliss. [cite news|url=http://money.cnn.com/2005/11/17/news/newsmakers/hollywood_sign |title=Buy a piece of HOLLYWOOD|author=Jessica Seid|publisher=CNN|date=2005-11-17] Bliss sold the sign to artist Bill Mack.

The sign is located on the southern side of in , north of the . A good viewpoint within 100 yards of the sign can be reached by driving north up Gower Street from and then north along Beachwood Drive.

In 2000, the installed a security system featuring motion detection and closed-circuit cameras. Movement any closer than 50 yards activates an alarm, and the police are called.

Land in the vicinity of the sign remains privately owned. Much of it was owned by the estate of , who had once planned a hilltop mansion at Cahuenga Peak; part of that tract was sold in 2002, and the new owners are interested in exploiting a route for a road to access the property granted in 1945 by the Los Angeles City Department of Water and Power. As a result, the city of Los Angeles is considering buying the property, possibly by raising money from celebrities as was done for the restoration. [cite news
url=http://www.suntimes.com/news/nation/900498,hollywood041708.article
title=Chicago investors' sale puts famous Hollywood sign in jeopardy, residents say
author=
date=
publisher=
accessdate=2008-04-17]

It is illegal to make unauthorized alterations to the sign. Although the city has occasionally allowed it in the past for commercial purposes, current policy does not permit changes to be made. This is largely due to neighborhood opposition and to past accidents. However, the sign has been unofficially altered a number of times, often eliciting a great deal of attention. Some of the more famous modifications have included:

*HOLLYWeeD – January 1976, following the passage of a state law decriminalizing marijuana.
*HOLLYWEED – December 1983, for the opening scene of the film "Hollywood Hot Tubs".
*HOLYWOOD – April 1977, for Easter sunrise service, viewable from the Hollywood Bowl.
*GO NAVY – November 1983, before that year's at the Rose Bowl stadium.
*RAFFEYSOD – January 1985, reportedly done by a band called "The Raffeys", who were trying to drum up publicity.
*HOLLYWOOD II – April 1986, to mark the revitalization of area.
*FOX – April 1987, for promotion of the television network.
*CALTECH – May 1987, on Hollywood's 100th birthday.
*OLLYWOOD – July 1987, during the hearings.
*HOLYWOOD – September 1987, for 's arrival.
*USCWOOD – 1987, for the annual USC-UCLA football game.
*As part of a promotion for the 1992 film "", a 75-foot-tall cutout of Holli Would was installed, appearing to sit on the sign. The alteration angered local residents, [cite news |first=Deborah |last=Schoch |title=Hollywood Residents Can't Shroud Anger Promotion: Paramount Pictures defends attaching a movie cartoon character to the famous sign. Citizens fear a tourist invasion and say that the landmark is being commercialized. |url=http://pqasb.pqarchiver.com/latimes/access/61039169.html?dids=61039169:61039169&FMT=ABS&FMTS=ABS:FT&date=Jul+06,+1992&author=DEBORAH+SCHOCH&pub=Los+Angeles+Times+(pre-1997+Fulltext)&desc=Hollywood+Residents+Can't+Shroud+Anger+Promotion:+Paramount+Pictures+def |publisher= |date=July 6, 1992 |accessdate=2008-09-22 ] [cite news |author=Associated Press |title=Cartoon Character Opens Landmark Rift |url=http://nl.newsbank.com/nl-search/we/Archives?p_product=SJ&s_site=mercurynews&p_multi=SJ&p_theme=realcities&p_action=search&p_maxdocs=200&p_topdoc=1&p_text_direct-0=0EB719DF2E0AA62A&p_field_direct-0=document_id&p_perpage=10&p_sort=YMD_date:D&s_trackval=GoogleP |publisher= |date=July 7, 1992 |accessdate=2008-09-22 ] who picketed the unveiling of the altered sign.

Other cities have imitated the sign in some way. In , the Duarte "D" can be seen off the Route 210. A sign next to features the words "THINK BLUE". has a sign with the words "ROSE HILLS". It glows neon pink in the evening.

The sign has been replicated on the side of a small hill next to the bar Legends on Bradford Road in , , .

The logo of the video rental chain Hollywood Video incorporates an artistic rendering of the sign.

The campus of has its acronym (LMU) displayed on a hill looking down the and neighborhoods.

A sign in the video game "" reads "Vinewood". "Vinewood" in "San Andreas" is the in-game replica of Hollywood, where in-game movies were made.

The cover for the album "Toxicity" by features cover art depicting the sign spelling out the band's name.

Presumably as a version of the famous letters, there is a large W on a hill in the town of .