Nong Khai (เทศบาลเมืองหนองคาย, Thesaban Mueang Nong Khai (Nong Khai Town) or หนองคาย or Nong Khai) is a city in North-East Thailand and is the capital of the Nong Khai Province. It is situated on the Mekong River and is the site of the first Thai-Lao Friendship Bridge across to Laos.The Thai-Lao Friendship bridge was largely funded by a gift to the Lao Government by the Australian Keating Labour Government. It is the Thai gateway to the Laos' capital of Vientiane, 25 kilometers up river, on the North bank opposite the Thai town of Sri Chiang Mai. At the time of its building, space for a rail track was installed along the center of the roadway to the Laos side. Construction of an extension to Tha Na Lang outside of Vientiane was begun early 2007, and officially opened March 5, 2009[1]. Nong Khai city is administered as Amphoe Mueang Nong Khai. 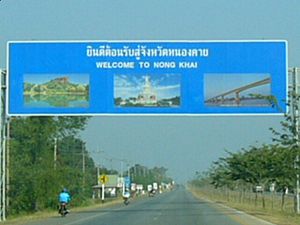 Nong Khai's main sight is Sala Keoku (alternatively spelled as Sala Kaew Ku, also known as Wat Khaek), a park of massive sculptures (some over 20m tall). The park is the handiwork of the mystic Luang Pu Bunleua Sulilat, who bought the land in 1978 when he was exiled from his native Laos (where he had built a similar park in Vientiane in the nineteen-fifties). Synthesizing Buddhist and Hinduist ideologies, Buddhas, many-armed goddesses, a seven-headed Naga snake and all sorts of human-animal hybrids dominate the scenery. 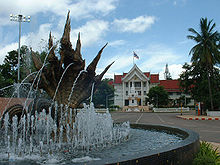 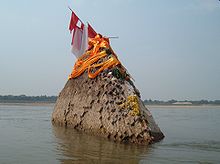 See also the Haw wars, memorialized by the monument before the Old City Hall (now a museum and cultural center); and, down by the Mekong, by Wat Angkhan (Thai: วัดอังคาร), which is Pali for Ashes of the Dead[1], as well as for Mars, the planet that the Romans named for their God of War. Nearby, the city maintains the lovely little Garden of Sorrows (Thai: สวนโศกเศร้า), with signs signifying this is where widows came to grieve.

In more recent years, Nong Khai has become a popular destination, with full Tourism Authority of Thailand th:การท่องเที่ยวแห่งประเทศไทย and local backing, during the Buddhist Lent festival when mysterious balls of light, or Naga fireballs, rise from the Mekong river. The balls resemble an orange sun, rise out of the river approximately 20 to 30 feet and disappear after three to five seconds. Although the fireballs can be seen at other times, most Thais travel to see them during the full moon in October when the incidence of them is considered to be much higher.

Nong Khai is essentially a border town with the typical traffic associated with such locations. Tourism consists mainly of short stopovers by people traveling to and from Laos. The main thoroughfare is mainly populated by hardware stores, banks and gold shops. A large, busy Indo-china market thrives in the city center along the riverside. Visitors are catered for by a wide selection of hostelries from budget guest houses to international hotels and thriving evening entertainment.

Nong Khai is connected to Laos via the First Thai-Lao Friendship Bridge, which permits direct traffic to Vientiane via road and rail (in the latter case, via Thanaleng Railway Station).