Dahlgren is a village in Hamilton County, Illinois, United States. The population was 514 at the 2000 census. It is part of the Mount Vernon Micropolitan Statistical Area.

According to the United States Census Bureau, the village has a total area of 1.0 square mile (2.6 km2), all of it land.

Dahlgren was established on March 29, 1872 by Deed of Dedication. On that date Alexander M. Sturman formally conveyed to the new town one square mile (2.6 km²) of land that had been platted the previous autumn. Its founding coincided with the construction of the Saint Louis & Southeastern Railway when most of the residents of the hamlet of Lovilla relocated en masse to the new rail line from a stage route (the so-called "New Mt. Vernon Road") that ran a few miles to the southeast of present-day Dahlgren and had itself supplanted the older Goshen Road from near McLeansboro.

Dahlgren was named for Rear Admiral John A. B. Dahlgren, a prominent Union officer during the American Civil War, and shareholder in the Louisville and Nashville Railroad, which later acquired the St. Louis & Southeastern.

It reached its peak population around 1910, at that time supporting numerous local businesses, a hotel and an opera house.

Dahlgren suffered general economic migration and decline coincindent with the economic depression of the 1930s. As roads were improved and automobiles became more widely used the primacy of local businesses waned as residents were able to begin trading in larger towns located farther away.

The decline continued until the early 1970s culminating with the end of passenger rail service effective May 1, 1971 and the closing of the local high school two years later. Even the arrival of the interstate highway system in the mid-1970s did not spur economic growth as the village board at the time elected to refuse local access to the highway. Since that time, despite the closing of all but a handful of local businesses, the economic situation has stabilized and improved. The remaining local niche retailers have established strong trade and new manufacturing interests have expanded. Residential real estate is becoming highly desirable owing to its relative scarcity and Dahlgren's reputation for excellent "quality of life."

Much of the brick-facade business district has fallen into ruin, yet the historic original St. L. & S.E. Railroad Depot, now owned by the village, remains in excellent condition, a superb example of "Railroad Gingerbread" style. 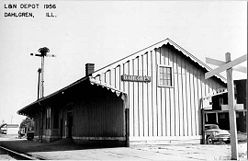 Agriculture remains the primary economic activity in the vicinity of Dahlgren. Other business activity includes retail sales and manufacturing, including the fabrication of custom cabinetry and countertops.

Dahlgren is located on Illinois Route 142 (formerly U.S. Route 460). The nearest access to the interstate highway system (I-64) is 10.5 km (6.5 mi) to the northwest. The Evansville Western Railway (EVWR) (formerly CSX Transportation) provides freight rail service to Dahlgren. CSX divested 200 km (120 mi) of rail line from Evansville, IN to Okawville, IL to the Paducah and Louisville Railway (PAL), an operating entity of Four Rivers Transportation, Inc., in a transaction whereby CSX sold all track, ties and track equipment to PAL and provided a 20-year lease on the right-of-way. Upon completion of the sale on 31 December 2005 PAL transferred all interests to the new Class III operating entity/subsidiary, EVWR, which began operating on 1 January 2006. CSX (formerly the Louisville & Nashville R.R.) retains title to all real estate on which the railroad is situated.

The Dahlgren post office provides service to 1,538 customers in the 62828 postal (ZIP) code. Dahlgren has had no locally published newspaper since the cessation of publication of The Dahlgren Echo many years ago. The current newspaper of record is The McLeansboro Times-Leader published weekly in the county seat. Area daily newspapers available for home delivery include television market as defined by Nielsen Media Research. Residents receive over-the-air reception of the following digital broadcast channels from network affiliates:

Sinclair Broadcast Group owned both the Fox and WB affiliates in the DMA prior to the September 2006 merger of UPN and WB into a newly created CW Network and was forced by Fox to convert its WB affiliate (WDKA) into a MyNetworkTV affiliate (MY49) . This allowed Raycom Media, owner of the local CBS and UPN affiliates, to convert its UPN affiliation (WQWQ) to The CW. WQWQ is a low-power station whose analog signal was never available over the air in Dahlgren; however, it is available as ATSC digital channel 12.2. With the digital TV transition RTV, formerly ion Television/PAX, (WPXS) moved its transmitter northwest of Breese, IL in the St. Louis, MO DMA and is no longer easily available over-the-air in Dahlgren. Viewers with a rotator and suitably elevated antenna can also receive virtually all over-the-air broadcasts from Evansville, Indiana.

Cable television service (analog), previously available from Longview Communication, was terminated in 2006. Hamilton County Communications (a wholly controlled subsidiary of the Hamilton County Telephone Cooperative) purchased the cable-operating rights from Longview in 2006 although it is unclear whether they will be able to operate a cable system under current FCC rules. HCC distribute digital TV using broadband internet.

Wireless telephony services are provided by ATT Mobile, formerly Cingular, (GSM850/GSM1900), T-Mobile (GSM1900), AllTel, formerly First Cellular of Southern Illinois, (now CDMA-only although legacy GSM850 service still operates), Verizon (CDMA), Nextel Partners (iDEN), and Sprint PCS (CDMA). In 2008 Verizon announced its intention to acquire AllTel. The US Dept. of Justice and FCC approved the merger on Oct. 30th[2] and Nov. 4th,[3] 2008 respectively. Conditions of the deal require Verizon to divest itself of some 100 markets across 22 states, of which one is the Mt. Vernon/Marion cellular marketing area (CMA) in which Dahlgren is located.[4]

Dahlgren is governed by a non-partisan Village President (Mayor) and six-member non-partisan Board of Trustees half of whom are elected to staggered 4-year terms in odd-numbered years. Jasper C. Goin, Jr. was reelected village president in 2009. The village provides basic utility services including water, sewer, gas and refuse removal.

Dahlgren is located within the Hamilton County Unit 10 school district. Elementary-age children attend Dahlgren Grade School through grade 6. Junior High School and High School students travel to the county seat of McLeansboro where a new combined school complex was completed in 2001. Dahlgren is also in Community College District #521 (Rend Lake College located Ina, Illinois) as established by the Illinois Board of Higher Education. However, university and college-age students are not restricted to attending in their local district.

There were 217 households out of which 30.9% had children under the age of 18 living with them, 54.4% were married couples living together, 7.8% had a female householder with no husband present, and 35.5% were non-families. 34.1% of all households were made up of individuals and 23.5% had someone living alone who was 65 years of age or older. The average household size was 2.36 and the average family size was 3.08.