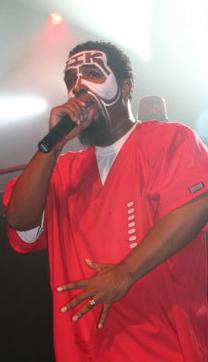 Aaron Dontez Yates (born in ) better known by his Tech N9ne (also, Tech N9NE), is an American . His musical career has spanned 20 years, during which he has performed sold out shows from Los Angeles to . He is also the best selling MC out of his hometown of Kansas City.

Tech N9ne is known for his wide range of collaborations with other well-known artists. In 1999, Tech N9ne was included on the track (and accompanying video) "The Anthem" from , two radio personalities based in .

He started his rap career because of a dare from one of his friends in high school. Early in his career, Tech N9ne was a member of a group called "NNUTT HOWZE", which he pays tribute to in many of his lyrics by saying "Six, six, triple eight, forty six, ninety nine, three" (6688846993), which spells out NNUTT HOWZE on the touch pad numbers of a . However, the group disbanded when they were dropped from their label, . Additionally, he saw glimpses of success as a member of the 57th Street Rogue Dog Villians - also a Kansas City-based group - with their single "Let's Get Fucked Up". [cite web|last=VonHolten|first=Tim|title=The Belly of the Beast|publisher=Lawrence.com|date=2003-12-22|url=http://www.lawrence.com/news/2003/dec/22/the_belly/|accessdate=2007-09-26]

Tech N9ne is a member of The Regime, a large collective of MCs including , , , and among various others. Fellow Kansas City rappers, BG Bulletwound and Grant Rice, are also included in the collective's roster. Tech N9ne is one of the original members of The Regime, as he has been with the group since its creation by Yukmouth in 1997.

In September 2008, Tech N9ne officially hit a milestone his career, recording over a million album sales to date, thanks to the release of his most recent double album, "Killer". Despite the accomplishment, the rapper remembers the struggles of his career, up until this point. However, he wasn't surprised. "It just reminded me of all the work we done in the past, up until now. It's something. It's dope," the rapper told BallerStatus.com. "I don't think it's sunken in yet. I've been celebrating for the last two days because that's a hell of an accomplishment. I've been planning success all my life. I'm not even a bit surprised, I'm happy about it. That just means I was right." He is now hard at work on his next album, "Sickology 101: The Study of Being Sick".

Tech N9ne and Travis O'Guin co-own the record label , which was created in 2002 after Tech N9ne's release from . [ [http://www.therealtechn9ne.com/albumbio/?num=3 Tech N9ne - Album Bio ] ] Under the label, Tech N9ne has released six albums, "Absolute Power", ', "", "", ', and "Killer". The label has signed several other performers and bands including Kutt Calhoun, , Project: Deadman which consists of Prozak, and producer , Big Krizz Kaliko, and Kabosh which is a joint effort by Tech N9ne and Kaliko where they will venture into the rock world. Recently, Strange Music signed Dirty Thug Records, the label that houses Grave Plott (Killa C & Liquid Assassin), to a distribution deal. Strange Music has also signed Brooklyn-area rapper and member of La Coka Nostra, , to release his upcoming second album The Hour of Reprisal. There are rumors that Ill Bill has signed with Strange Music to join the actual label, although there has been no direct word as to whether his deal is for distribution only or not. Ill Bill later announced that Uncle Howie Records was effectively a sub-label of Strange now, similar to "like how Jay Z brought Roc-A-Fella to Def Jam."

Tech N9ne is featured on the soundtrack for the 1997 movie , featuring and , with the song "Questions."

Four of Tech N9ne's songs were featured in the 2007 , "". Two of those songs, "Caribou Lou" and "Night and Day" are from the 2006 album, "". Also included are "Slither" from his 2002 album " Absolute Power" and "LA LA Land" featuring Gina Cassavetes (daughter of film director ) which is featured on the "Alpha Dog" . Originally, Tech N9ne was behind scoring the entire movie but the movie studio decided to remove some of his music to add more commercially known songs. [cite web|last=D.|first=Spence|title=Various Artists - Alpha Dog: Music From The Motion Picture|publisher=IGN.com|date=2007-01-12|url=http://music.ign.com/articles/755/755004p1.html|accessdate=2007-09-26]

In early 2007, Tech N9ne was featured on the program . In summer 2008, Tech N9ne's song "Earthquake" was featured on an episode of MTV's in which the crew had to visually convey the title of the song in their performance.

Tech N9ne's Single "Like Yeah" was featured on the intro credits of the 2008 MTV show "From G's to Gents".

:fnb|2-1Yet to be officially released.:fnb|2-2Tech N9ne does not physically appear, but he did have a helping hand in scoring the movie, this includes the placement of several of his songs in the films score as well as the appearance of a song from fellow label mates .:fnb|2-3Completed, awaiting release. [cite web |url=http://www.imdb.com/title/tt1031606/|title=The Life of Lucky Cucumber (2008)|accessdate=2008-09-03|work=IMDB.com]