Naval Station Great Lakes is the home of the United States Navy's only boot camp, located near the city of North Chicago, Illinois, in Lake County. Important tenant commands include the Recruit Training Command, Training Support Center and Navy Recruiting District Chicago. Naval Station Great Lakes is the largest military installation in Illinois and the largest training station in the Navy. The base has 1,153 buildings situated on 1,628 acres (6.59 km2) and has 50 miles (80 km) of roadway to provide access to the base's facilities. Within the naval service, it has several different nicknames, including "The Quarterdeck of the Navy," or the more derogatory "Great Mistakes."

The base is like a small city, with its own fire department, Naval Security Force, and public works department.

One of the landmarks of the area is Building 1, also known as the clocktower building. Completed in 1911, the building is made of red brick, and has a tower that stands 300 feet over the third floor of the building. The large parade ground in front of the administration building is named Ross Field. 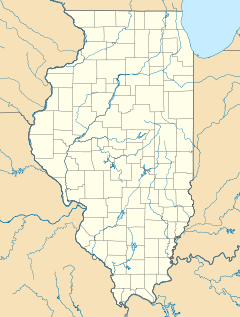 In 1996, RTC Great Lakes became the Navy's only basic training facility. The Base Realignment and Closure Commission of 1993 resulted in the closure of Naval Training Center San Diego, California and Naval Training Center Orlando, Florida, their associated Recruit Training Commands, and the consolidation of US Navy enlisted recruit training to Great Lakes. Approximately 40,000 recruits pass through Recruit Training Command annually with an estimated 7,000 recruits onboard the installation at any time. RTC Great Lakes has been turning civilians into Sailors for over 100 years.

TSC Great Lakes is the Navy's premier technical training command. It has an annual throughput of 16,000 sailors a year. TSC supports the following five learning sites:

Culinary Specialist (CS) A-school was also taught at TSC Great Lakes until December 10, 2010, when the school graduated its final class. The course has been consoldated with the US Army's parallel program and relocated to Fort Lee, Virginia.

Hospital Corpsman (HM) "A" School has been moved out of Great Lakes. The last class graduated on July 27, 2011. It's last class was Class 11-125. The school has relocated to the Medical Education and Training Campus at Fort Sam Houston, Joint Base San Antonio, Texas.[2] This change has merged Air Force, Army, and Navy Medical staff to a centralized location.

Despite issuance of the Base Realignment and Closure (BRAC) list in 2005, Naval Station Great Lakes and RTC (Recruit Training Command — the Boot Camp portion) are not slated for closing. Almost $800 million has been invested in building new barracks ("ships"), Battle Stations 21, as well as numerous upgrades around the base, including a non-denominational chapel, and reception center for civilian families. It is the United States Navy's only boot camp facility. Approximately 40,000 recruits pass through RTC annually with up to 7,000 enrolled at the installation at any time.

On or near the base is the Great Lakes Naval Museum, one of fifteen official U.S. Navy museums.[3]