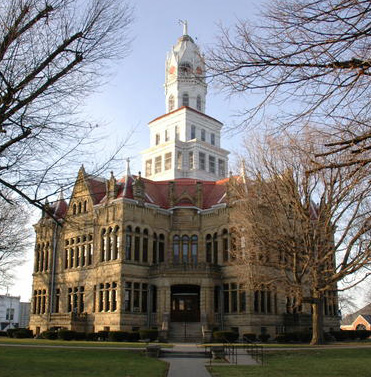 and pass through Paris. One railroad passes through town, a line that goes north toward Danville and southeast toward .

There were 3,874 households out of which 27.7% had children under the age of 18 living with them, 45.1% were married couples living together, 12.1% had a female householder with no husband present, and 38.5% were non-families. 34.0% of all households were made up of individuals and 17.7% had someone living alone who was 65 years of age or older. The average household size was 2.29 and the average family size was 2.91.

Paris was the home of a minor league baseball team in the 1950s named the . A contest was held among the community to decide on a name for the team. The winning submission, Paris Lakers, was sent in by James C. Dickey.

*, industrialist
*, ranger who helped rescue the
*, engineer who was co-author of the
*, attorney
*, actor, "Alfalfa" in the "" comedies.

Paris is the home of Saint Mary's School. It is a Catholic school serving grades PreSchool thru 8th grade and is open to children of all religions.

Paris is composed of two school districts: District 95 (for those living inside city limits) and District 4 (for those outside the city limits). Those who are in District 95 send their children to Mayo Middle School, while District 4 children attend Crestwood School. However, both schools feed into one high school. Paris High School is the only secondary education facility in Paris and is under District 95. Paris High School's mascot is the tiger and its colors are orange and black.