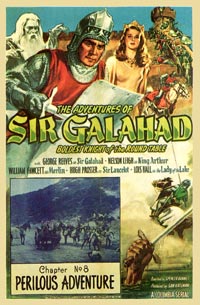 "Adventures of Sir Galahad" (1949) was the 41st serial released by . It was based on Arthurian legend and, notably, was one of the very few serials of the time with a period setting that was not a western.

In fact, the Arthurian film cycle started with the "Adventures of Sir Galahad" serial. In this version, the youth , trying to emulate his father , wants fervently to be admitted to the order. When he defeats Sir Bors and Sir Mordred in tournament, agrees to knighthood if he can guard for one night. Unfortunately, during that night the sword is stolen by a mysterious personage known only as the Black Knight. Possesion of Excalibur makes the holder invincible and without it the sovereignty of Arthur is endangered, then Galahad is refused knighthood until the sword is found. Galahad, aided by Sir Bors, is hindered in his quest by Ulric, the Saxon King, who invades England, and by the magician, who harasses our hero at every turn. Galahad suspects that the Black Knight is a traitor within who seeks the throne in alliance with the Saxons, while , Arthur's half sister and also a magician, helps him fight both Merlin's magic and the Saxons. When Queen Guinevere is seized by the traitors, Merlin relents and sends Galahad to the , who gives him Excalibur. Finally, Galahad unmasks the Black Knight and restore the talismanic symbol of Arthur's powers, Excalibur, not without before suffering sufficient trials and tribulations over 15 episodes to prove himself worthy of knighthood.

"The Adventures of Sir Galahad" was based on Arthurian myth and legend, a setting that gave it "unique" opportunities for a serial. [cite book
last = Harmon
first = Jim
coauthors=
authorlink = Jim Harmon
title = The Great Movie Serials: Their Sound and Fury
origyear = 1973
publisher = Routledge
isbn = 9780713000979
pages = pp. 330
chapter = 13. The Classics "You Say 'What Dost Thou Mean By That?' and Push Him Off the Cliff" ]

* George Reeves, who gave a solid and credible performance as Galahad, became a popular star few years later when he was cast in the title role of "The Adventures of Superman".
* According to William C. Clines, Reeves helped to make this a superior serial to "" (1946) – another Medieval European setting with cliff-hangers released by the same studio.