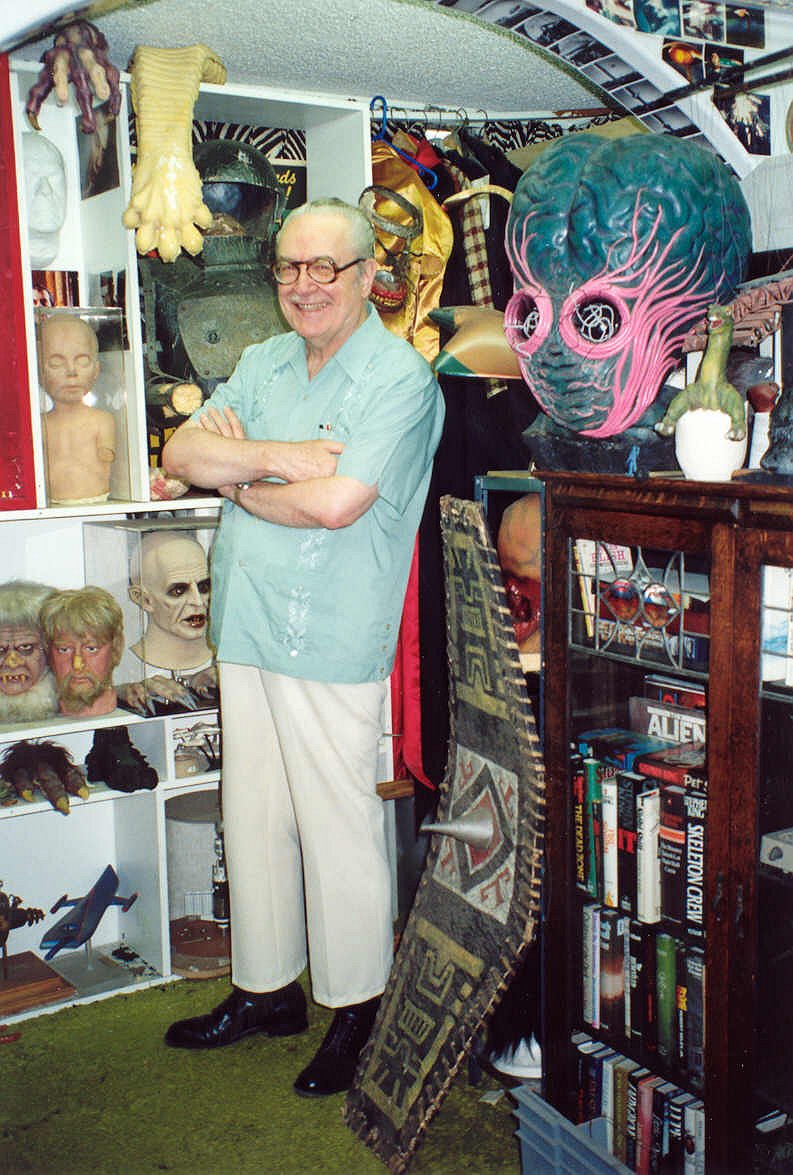 Forrest J Ackerman (born , ) is an American collector of books and movie memorabilia and a science fiction fan. Ackerman, known as "Forry" or "4e" or "4SJ", was influential not only in the formation, organization, and spread of science fiction fandom, but was also a key figure in the wider cultural acceptance of science fiction as a literary, art and film genre. Ackerman is also known as the editor-writer of the magazine "", as well as an occasional author, actor, producer (""), and literary agent.

Ackerman or, "Mr. Science Fiction," Fact|date=July 2008saw his first "" in 1922 ("One Glorious Day"), purchased his first , "", in 1926, created The Boys' Scientifiction Club in 1930 ("girl-fans were as rare as unicorn's horns in those days"), contributed to both of the first s, "The Time Traveller", and the Science Fiction Magazine, put out and edited by Shuster & Siegel of Superman fame, in 1932, and by 1933 had 127 correspondents around the world. He attended the in 1939, where he wore the first "futuristicostume" (designed and created by Myrtle R. Douglas) and sparked fan costuming. He has attended every but two thereafter. Ackerman invited Ray Bradbury to attend the now legendary Clifton’s Cafeteria Science Fiction Club, where Ray met the writers , , , , , and . And with $90 from Forrest, Bradbury launched a fanzine, "Futuria Fantasia", in 1939.

Ackerman helped found the , a prominent regional organization in science fiction fandom, as well as the (N3F). He also provided publishing assistance in the early days of the , and (as the author of several novels under the name "Laurajean Ermayne") was dubbed an "honorary lesbian" at a DOB party. [Matthesen, Elise. "Vampires and Aliens." "Lavender Lifestyles", Nov. 24, 1995] He is (or was) personally acquainted with many twentieth-century writers of science fiction. He is noted for having amassed an extremely large and complete collection of science fiction, and memorabilia, which was, until 2002, maintained in a remarkable home/museum known as the 18-room "Ackermansion" in the Los Feliz district of Los Angeles, filled with 300,000 books and pieces of movie memorabilia. He has entertained approximately 50,000 fans at open houses since 1951, including 186 fans and pros in one memorable night, including astronaut . Ackerman is a board member of the Seattle , where many items of his own collection are displayed. Ackerman received a unique 1953 Hugo Award for "#1 Fan Personality" which some might say is the equivalent of the present-day .

Ackerman has had 50 stories published, including collaborations with , Francis Flagg, Robert A. W. Lowndes, Marion Zimmer Bradley, Donald Wolheim and Catherine Moore and the world's shortest — one letter of the alphabet. His stories have been translated into six languages. Ackerman named the sexy comic-book character and wrote the origin story for the comic.

Ackerman is fluent in the international language, , and claims to have walked down Hollywood boulevard arm-in-arm with singing "", the hymn of Esperanto. [ [http://4forry.best.vwh.net/esper.htm Ackerman's personal page about Esperanto.] ]

Through his magazine, "" (1958–1983), Forrest J Ackerman introduced the history of the science fiction, fantasy and horror film genres to a generation of young readers. At a time when most movie-related publications glorified the stars in front of the camera, "Uncle Forry", as he's referred to by many of his fans, promoted the behind-the-scenes artists involved in the magic of movies. In this way Ackerman provided inspiration to many who would later become successful artists, including , , , , , , (of the band Kiss), , , , , and countless other writers, directors, artists and craftsmen.

In the 1960s, Ackerman organized the publication of an English translation in the U.S. of the German science fiction series "", the longest science fiction series in history. These were published by Ace Books from 1969 through 1977. Ackerman's German-speaking wife Wendayne ("Wendy") did most of the translation. The American books were issued with varying frequency from one to as many as four per month. Ackerman also used the paperback series to promote science fiction short stories, including his own on occasion. These "magabooks" or "bookazines" also included a film review section, known as "Scientifilm World", and letters from readers. The American series came to an end when the management of Ace changed and the new management decided that the series was too juvenile for their taste. The last Ace issue was #118, which corresponded to German issue #126 as some of the Ace editions contained two of the German issues, and three of the German issues had been skipped. Forry later published translations of German issues #127 through #145 on his own under the Master Publications imprint. The original German series continues today and passed issue #2400 in 2007.

He also contributed to film magazines from all around the world, including Spanish speaking "" magazine, from Argentina, where he had a monthly column for over four years. Ackerman says, "I aim at hitting 100 and becoming the of science fiction".

Ackerman currently lives in the new "Acker-mini-mansion" in Hollywood where he continues to entertain and inspire fans weekly with his amazing collection of memorabilia and priceless stories of the golden age of art, filmmaking, literature and all things fantastical.

Appearances in film, TV and music

In 1961, Ackerman narrated the record "Music for Robots" created by . The cover featured Forrest Ackerman's face superimposed on the movie robot "". The record was reissued on cd in 2005.

Ackerman himself appears as a character in "", "The Vampire Affair" by (a novel in the "Man from U.N.C.L.E." series), and 's novel "Blown". A character based on Ackerman, and his "Ackermansion", appears in the Niven/Pournelle collaboration "Fallen Angels".

A life-long fan of science fiction "s", Ackerman has had cameos in over 210 films, including bit parts in many monster movies ("The Howling", "Innocent Blood", "Return of the Living Dead Part II"), more traditional "imagi-movies" ("The Power", "The Time Travelers", ""), spoofs ("", ""), and at least one major music video (Michael Jackson's "Thriller"). Thus, his is 2.

Ackerman appears extensively on-screen discussing his life and the history of in the 2006 documentary film "Finding the Future". [http://www.findingthefuture.com]

In 2007, Roadhouse Films of Canada released a documentary titled 'Famous Monster: Forrest J Ackerman' which takes a fast-paced, colorful look at the life of science fiction's greatest fan. The documentary is currently only available on DVD in the UK, but airs regularly on the BRAVO channel.