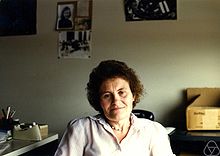 Marina Ratner (*1938) is a professor of mathematics at the University of California, Berkeley who works in ergodic theory. Around 1990 she proved a group of major theorems concerning unipotent flows on homogeneous spaces, known as Ratner's theorems. Ratner was awarded the Ostrowski Prize in 1993 and elected to the National Academy of Sciences the same year. In 1994 she was awarded the John J. Carty Award from the National Academy of Sciences.[1]

Marina Ratner was one of Yakov Sinai's students at the Moscow State University.