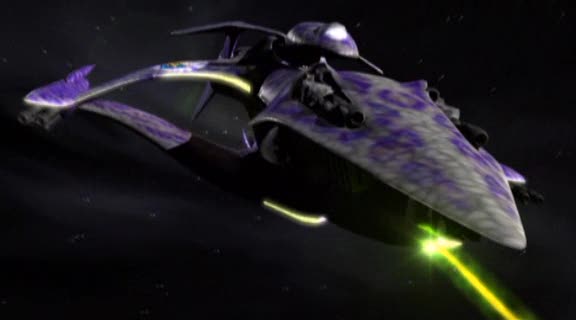 The White Star is a fictional, medium-sized combat type employing a mix of and technology in the "". The sleek design intentionally differs from traditional and craft to keep its identity secret.

The White Star commanded by John Sheridan was thought to be unique until near the end of the third season, where it was revealed that the first wave of 40-50 White Stars had entered duty. White Stars continued to be built and they were used extensively thereafter.

Unlike most other large ships in the series, White Stars were numbered, rather than being given unique names. At least 90 White Stars had been constructed by the end of the series.

The White Star was regarded as being amongst the smallest ships in the Babylon 5 universe which had the capability of opening its own hyperspace portals (known as "jump points") rather than relying on the jump gates used primarily by civilian craft, or upon jump points created by larger allied craft.

The White Star-class Monitor was designed and built through a collaborative effort between the religious caste and the Empire. With the reorganization and revitalization of the Rangers as a force with which to fight the Shadows, it was imperative that they be provided with a warship that would not be inherently recognized as either Vorlon or Minbari. As such, the ship was designed and built in secret and in large numbers by the Minbari worker caste. These vessels proved devastating during the Shadow War and the subsequent Earth Alliance Civil War. After the dust had settled, they served as a vital part of the Interstellar Alliance's military assets.

The original White Star was vaporized as Sheridan crashed it into the largest city on Z'ha'dum while detonating two 500- s.

A White Star resembles a flying with outstretched s. The design is very sleek and elegant and, apart from making the ship´s origin virtually untraceable by appearance (which was the intent), it makes the White Star look several steps beyond even the current Minbari technology (which it really is). It is equipped with Minbari stealth systems and an advanced gravitic drive that manipulates , giving it great speed and maneuverability. A side effect of this type of propulsion is the cancellation of inertia, making for a perfect inertia dampening system. Also among the properties of this technology is the ability to create "real", not so much as artificial, gravity. In fact, the White Star's propulsion system is so advanced that the 450-meter ships can fly in close formation and maneuver with agility one would only expect in a fighter. They are also the fastest ships ever built by any of the younger races. The holographic viewsystem on the main bridge has likely been adapted from the Minbari Sharlin-class war cruiser, although here the holo-projection takes the shape of a screen, rather than a 360-degree panoramic-view chamber (this is likely to save space, not because of technological restrictions aboard the White Star). The offensive armaments consist of two main weapon types, both apparently based on standard Minbari weapons. Beacause of their sheer power compared to the ship´s size however, it is likely that these as well were augmented somewhat using the Vorlons´ expertise. As a result, a single White Star packs more punch than an Earth Alliance , a ship more than five times her size (by mass). The standard-use weapon are two twin wingtip-mounted fusion cannons and two somewhat more powerful neutron cannons on the bow. When heavy firepower is needed, the ship is equipped with a variable-output gravitic discharge beam cannon, likely a combination of Minbari and Vorlon weapon technology, which was seen capable of destroying even one of the dreaded Shadow battlecrabs (note though that this was on overcharge, a sustained burst of about 10 seconds, and the Shadow ship was effectively paralyzed).

Since each White Star uses Vorlon bio-armor and control systems, the ship is actually a living entity that thinks and learns and adapts from experience. After several years of service no two White Stars are the same. The organic armor is very tough and can repair itself. It also adapts to enemy fire to provide better protection against weapons that it already "knows". The "bio-armor" itself remains a mystery in terms of function or composition, no canon technical data exists on it. However, it can be surmised that it is comprised mainly of complex polymerous molecules organized into "tissue" ("organs" are unlikely, though) in a very intricate fashion. One could imagine living kevlar. Given that we know that some organic materials used in small measure by real-world organisms vastly outperform human constructs, like spider thread vs. steel tether or steel pin vs. a wasp´s sting, something similar created intentionally and on large scale could indeed have near-miraculous properties. That is not to say that Vorlon or Shadow biotechnology has to be carbon-based however, as for example silicon has the potential to create "organic" compounds as well. Each White Star is furthermore equipped with a Vorlon-based gravitic-deflection system that deflects the explosive energy of a weapon´s blast away from the ship, leaving only the physical impact of the blast itself. Little energy actually touches the hull; in order to damage or destroy a White Star an attack must generate enough power to overwhelm the total defensive output of the shields.

Like all Minbari warships, the White Stars also are equipped with a Minbari stealth system. This stealth device creates a jamming field that absorbs incoming sensor beams or refracts/deflects the sensor beams away from the transmitter, thus shielding the ship from many forms of targeting sensors and the scanners of almost all the younger races. This is not to say that the stealth device makes the ship truly invisible to the naked eye however, rather invisible to scanners. Some of the more advanced sensor systems can pick up a Minbari ship through the stealth field, but even then the sensor echo is extremely small.

The heavy losses suffered in the conflicts of the and subsequent liberation of Earth led to the design of the larger and more powerful as an Earth-Minbar joint project taking after Vorlon designs. The first results were two prototypes completed five years after the events of the television series.

In the episode "", set in the year 2281, a possible variation on the White Star is used by Sheridan to make his final voyage. This version appears smaller than the original White Star and appears to be a personal transport or a scout/reconnaisance ship.