Donaueschingen is a German town in the Black Forest in the southwest of the federal state of Baden-Württemberg in the Schwarzwald-Baar Kreis. It stands near the confluence of the two sources of the river Danube (in German: Donau;[2] the town's name is an eponym).

Donaueschingen stands in a basin within low mountainous terrain. It is located about 13 km (8.1 mi) south of Villingen-Schwenningen, 24 km (15 mi) west of Tuttlingen, and about 30 km (19 mi) north of the Swiss town of Schaffhausen. In 2003, the population was 21,300 making it the second largest town in the district (Kreis) of Schwarzwald-Baar. The location of the town is favourable for its role as a regional rail hub.

Donaueschingen lies in the Baar basin in the southern Black Forest at the confluence of the Brigach and Breg rivers— the two source tributaries of the Danube— from which the town gets its name.

The town is close to Lake Titisee and less than an hour's drive from Switzerland and France. 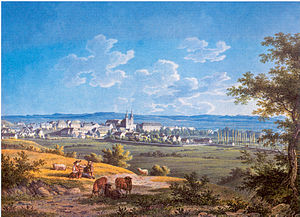 The town of Donaueschingen in 1827 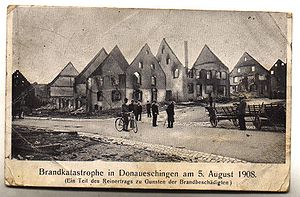 Destruction after the August 1908 fire

Donaueschingen is first recorded as Esginga in 889; the modern form of the name is first attested in 1292.[3] In 1283, Rudolph von Habsburg granted the principality of Baar and Donaueschingen to Heinrich von Fürstenberg. The right to brew beer was also connected with this grant. This is the source of the Royal Fürstenberg Brewery. In 1488, possession was passed to the Count of Fürstenberg-Baar. From the 18th Century it was the residence of the Princes of Fürstenberg. In 1806, Donaueschingen came under the rule of the Grand Duchy of Baden and was granted township in 1810. A large part of the town was destroyed by fire in 1908. Donaueschingen has a tradition as a military garrison; since World War II the French military has maintained barracks in the town, and, until the early 1990s, the U.S. Air Force operated a contingency hospital there. Fortunately the hospital never received casualties on a large scale from military operations; it saw the most activity in 1989, when the United States offered the facility as temporary housing for refugees leaving from East Germany to the West.

Though the Princes of Fürstenberg were nominally mediatised and deposed as absolute ruler of the principality, they still own huge property in their former lands, including their palace with the surrounding parks and gardens. The Schlosspark (palace gardens) which used to be public and the only park accessible to the citizens of the town since 1806 recently became off-limits again. The Princes of Fürstenberg were also the owners of an important manuscript of the Nibelungenlied (Manuscript C) until they sold it in 2001. The ancestral brewery has also been sold.

The results of the 2004 local elections are as follows:

The town's economy consists of nearly 1,000 various enterprises, of which 24 are medium-sized employing 2,200 people. The most important industries are machine assembly, semiconductors, injection moulding, magnetics, dyes, and shoe manufacturing.

Donaueschingen is a regional rail hub; four rail lines join in the town. It sits on the Schwarzwaldbahn line from Offenburg to Konstanz and it is the start of the Höllentalbahn (Schwarzwald) from Donaueschingen to Freiburg im Breisgau. Both of these lines are uniquely constructed because of the rough Black Forest terrain they cover. Donaueschingen is also the starting point for the Donautalbahn and the Bregtalbahn which run to Ulm and Bräunlingen respectively. The town is part of the Schwarzwald-Baar public transport system.

The town is on the A 864, a spur of the A 81 to Stuttgart. Three Federal Highways cross each other near Donaueschingen: the B 27 from Stuttgart to Schaffhausen; the B 31 from Freiburg im Breisgau to Lindau and the B 33 from Offenburg to Konstanz.

The long-distance Danube Cycle Trail begins in Donaueschingen and follows the course of the Danube. It is one of the most well-known and longest bicycle trails in Europe.

There are two professional training schools: the Donaueschingen Commercial School and the Business and Home Economics Schools. There is also the Nursing College and the College for Agriculture. The Academy for Continuing Education and Personal Development is located in the former district hospital.

Donaueschingen has partnerships with the following cities:

Sons and daughters of Donaueschingen