The North American ice storm of 1998 (also known as Great Ice Storm of 1998 and Great Ice Storm '98) was a massive combination of five smaller successive ice storms which combined to strike a relatively narrow swath of land from eastern Ontario to southern Quebec to Nova Scotia in Canada, and bordering areas from northern New York to central Maine in the United States, in January 1998. It caused massive damage to trees and electrical infrastructure all over the area, leading to widespread long-term power outages. Millions were left in the dark for periods varying from days to weeks, leading to more than 30 fatalities, a shut down of activities in large cities like Montreal and Ottawa, and an unprecedented effort in reconstruction of the power grid. The ice storm led to the largest deployment of Canadian military personnel since the Korean War, with over 15,000 Canadian Forces personnel deployed in Ontario, Québec and New Brunswick at the height of the crisis.

Freezing rain is common in Canada and New England, generally occurring at the narrow boundary between cold air from the East and North and moist air from the South. Typically, a warm air mass will travel northward along the Mississippi Valley and overrun a shallow layer of cold air trapped at the surface. Such a favourable cold air damming happens with an east to northeasterly flow in the St. Lawrence and the Ottawa Valley, and along the axis of the Appalachian Mountains.

Snow is produced at upper level in such a winter storm system but it eventually melts into rain as it falls through the warm air layer, above freezing temperature, associated with the overrunning. The rain passes through colder air near the surface and supercools. When that rain touches the ground in the cold air below, the droplets freeze on contact, creating accumulations of ice. If the cold air layer is too thick, the droplets refreeze before hitting the ground and form ice pellets which are less hazardous.

The Montreal area typically receives freezing rain between 12 and 17 times a year, averaging between 45 and 65 total hours of rain. However, a freezing rain storm usually lasts only a few hours and leaves a few millimetres of accumulations. It renders roads and sidewalks slippery, causing minor traffic collisions, but road crews use de-icing material to take care of it. Power lines and other equipment are built according to tough standards since large accumulation events happened many times prior to 1998. In Quebec, standards were reinforced after a storm left 30 to 40 millimeters (1 to 1.5 inches) of ice over Montreal in 1961.[1]

Prior to the 1998 storm, the last major ice storm to hit Montreal (1961) deposited around 30 to 60 millimetres (1½ to 2¼ inches) of ice. However, the 1998 storm left deposits twice as thick, downing power lines all over the region, damaging most of the trees in Montreal, and leaving streets covered in a thick, impassable layer of ice.[1] 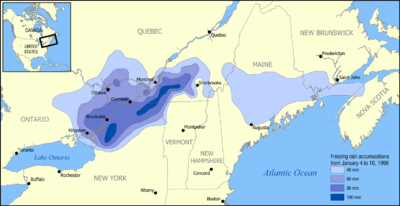 The ice storm affected a large part of eastern Ontario, southwest Quebec, and New York state. This map shows the accumulation of freezing rain in those areas.

On January 4, 1998, an upper level low system stalled over the Great Lakes, pumping warm and moist air from the Gulf of Mexico toward the upper St. Lawrence Valley. The upper flow then turned eastward, bringing this air mass down toward the Bay of Fundy. At the same time, a high pressure center was sitting farther north in Labrador, keeping an easterly flow of very cold air near the surface.[2] For the winter, an unusually strong Bermuda high pressure area was anchored over the Atlantic Ocean, which prevented these systems from moving further to the east, as most winter storms do when they pass over the Great Lakes–St. Lawrence region.

A series of surface low pressure systems passed in this atmospheric circulation between January 5 and January 10, 1998. For more than 80 hours, steady freezing rain and drizzle fell over an area of several thousand square miles of Eastern Ontario, including Ottawa and Kingston, an extensive area in southern Quebec, northern New York, and northern New England (including parts of Vermont, New Hampshire and Maine).

Farther to the south, southern Ontario and western New York, as well as much of the Appalachian region from Tennessee northward, received heavy rain and severe flooding, while further east, the Canadian Maritimes mostly received heavy snow. Exacerbating the problem was a steep drop in temperature that immediately followed the passage of the freezing rain, which combined with the extreme power outages led to numerous indirect deaths due to carbon monoxide poisoning from generators and other sources as people desperately tried to remain warm. 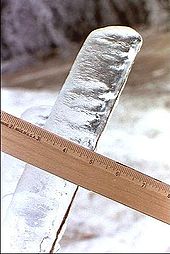 The 2 inches of ice on this twig well illustrates the impact.

Many power lines broke and over 1,000 pylons collapsed in chain reactions under the weight of the ice, leaving more than 4 million people without electricity, most of them in southern Quebec, western New Brunswick and Eastern Ontario, some of them for an entire month. At least twenty-five people died in the areas affected by the ice, primarily from hypothermia, according to Environment Canada.[3] Twelve more deaths and hundreds of millions of dollars in additional damage were caused by the flooding farther south from the same storm system.

The bridges and tunnels linking Montreal with the South Shore were closed because of concerns about weight tolerances or ice chunks falling from the superstructures. All but one power linkage to the island of Montreal were down for several days,[4] disabling both of the city's water pumping stations.[5] When power was restored, parts of Montreal remained impassable due to large chunks of ice falling from rooftops and endangering pedestrians and motorists; large portions of Old Montreal and the downtown core were cordoned off by police, due to the dangers of large sheets of ice falling from buildings.

The area south of Montreal (Montérégie) was so affected that the triangle formed by Saint-Hyacinthe, Granby and Saint-Jean-sur-Richelieu was nicknamed the triangle noir ("dark or black triangle") by the French-language media,[6] and the Triangle of Darkness in English media,[4] for the total lack of electricity for weeks.

Cities such as Ottawa, Smiths Falls, and other Eastern Ontario municipalities, that had never experienced such an amount of freezing rain, declared a state of emergency. On January 7, Ontario, Quebec, and New Brunswick called on the help of the Canadian Forces, prompting the deployment of more than 15,000 military personnel at the peak of the crisis. In addition to help residents, CN locomotives (CN3502 and CN3555) were moved off the tracks and used to provide power to residents of Boucherville and Coteau-du-Lac, south and west of Montreal respectively. A third locomotive was moved to Boucherville, but never actually put to use.[7]

The loss of electrical power also greatly affected pig and cattle farmers, as they could no longer provide water or adequate ventilation to their barns full of livestock, leading to the death of many animals. Many barns also collapsed under the weight of the ice, killing the animals trapped inside.[8]

Millions of trees were brought down by the weight of ice around the affected areas.[9] As many trees were damaged or fell by the heavy ice, the maple syrup and orchard regions suffered heavy blows and massive losses in the storm; Quebec's maple sugar industry, the largest in the world, was devastated.[9] As another example, 5,000 trees in Montreal's Mount Royal Park had to be cut, 80% (140,000) of the rest were damaged to different degrees and had to be trimmed, a large number severely.[9] The mountain park looked more like a logging camp than a nature oasis for many weeks.

Critically, about 1,000 steel electrical pylons (said, in Quebec, to be the most solid in the world) and 35,000 wooden utility poles were crushed and crumpled by the weight of the ice, further damaging power supply and hampering the return of electricity. Teams were brought in from places such as Prince Edward Island and Nova Scotia, along with teams from the United States and the Canadian Forces, to help restore power to affected homes in eastern Ontario and western Quebec.

Roughly 700,000 of Maine's 1.2 million residents were without electricity, the Maine National Guard was mobilized, and hundreds of utility crews from as far away as North Carolina arrived to help.[10]

Three weeks after the end of the ice storm, there were still thousands of people without electricity. In Quebec alone, 150,000 persons were without electricity as of January 28.[11] Estimates of material damages reached around $2 billion Canadian for Quebec alone. Overall estimates are around $4–6 billion US for all the areas affected.[12] Damage to the power grid was so severe that major rebuilding, not repairing, of the electrical grid had to be undertaken.[13] 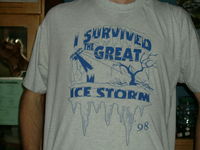 A T-shirt sold in Ottawa, Ontario, a region affected by the 1998 North American Ice Storm.

With many roads impassable due to heavy snowfall or fallen trees, broken power lines and coated with a heavy layer of ice, emergency vehicles could hardly move. On January 7, the provinces of New Brunswick, Ontario, and Quebec requested aid from the Canadian Forces (CF), and Operation Recuperation began on January 8. Over 15,000 troops were deployed. It was the largest deployment of troops ever to serve on Canadian soil in response to a natural disaster, and the largest operational deployment of Canadian military personnel since the Korean War.

CF members from about 200 units across Canada helped provincial and municipal workers clear roads, rescue people and animals trapped by storm wreckage, evacuate the sick, shelter and feed about 100,000 people frozen out of their homes, and ensure that farmers had the generators and fuel required to keep their operations going. CP-140 aircraft from 14 Wing Greenwood, NS conducted aerial imagery of the downed powerlines in Quebec and Ontario. Military engineers and technicians worked around the clock with hydro and telephone crews to repair and replace downed transmission towers and utility poles. On January 13, at the request of the Province of Quebec, CF members assumed the powers of peace officers in the most devastated areas around Montreal.

At the height of this crisis, Operation Recuperation involved 15,784 deployed personnel (including 3,740 Reservists) from all three CF commands; 10,550 in Quebec, 4,850 in Ontario and 384 in New Brunswick. In addition, 6,200 CF members and DND employees working at their regular jobs provided the logistical support required to sustain the operation.[14]