The Power and the Glory (film)

The Power and the Glory (film)

Infobox Film
name = The Power and the Glory 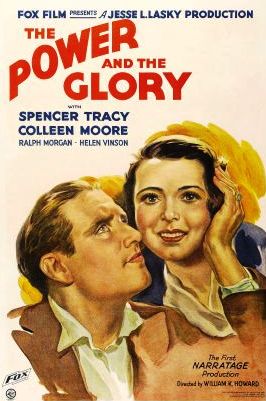 "The Power and the Glory" is a 1933 film starring and , written by , and directed by . It was Sturges' first script, which he delivered complete in the form of a finished shooting script, for which he received $17,500 and a percentage of the profits. Though this is now a common practice in Hollywood, it was unusual at the time and garnered much attention. [American Masters [http://www.pbs.org/wnet/americanmasters/database/sturges_p.html Preston Sturges] ]

The film, told through flashbacks, is often cited as the prototype for "". Tracy's powerful performance in a boardroom scene is widely considered one of his most thrilling sequences as an actor.

The film was loosely based by Sturges on the life of , his second wife's grandfather, who founded the , which later became . Like Tom Garner, the lead character in "The Power and the Glory". Post worked his way up from the bottom, and ended his own life, but otherwise, according to Sturges, their lives did not correspond.

After the funeral service for Tom Garner (), a powerful and much-hated railroad tycoon who committed suicide, his best friend, Henry (), recalls Garner's life, his family problems, and his rise from track walker to president of the railroad.

originally wrote the script as a freelance project after being let go by . He told the story to producer Jesse L. Lasky, who had his own unit at Fox, who requested a treatment. Sturges refused to do a treatment, and instead delivered a finished shooting script, which Lasky said was "the most perfect script I'd ever seen," with nothing that needed to be trimmed. Sturges offered the script to Lasky for $62,475, but Lassky instead structured a deal in which Sturges got $17,500 upon signing, 3 1/2% of the first $500,000 in receipts, 5% of the next $500,000, and 7% of all receipts over $1,000,000. Such a percentage deal was highly unusual at that time, and caused an uproar among producers and writers.

Both director and Spencer Tracy were supposed to have worked on "" [imdb title|0025472|Marie Galante] , but when it was postponed, they were transferred to "The Power and the Glory". and were both considered for the part of "Sally Garner," eventually played by . Moore was lent to Fox by MGM, as was Helen Vinson, and had not appeared in a film since 1929. [imdb name|0601067|Colleen Moore (I)]

The film was in production from to late April fy|1933, with some re-shooting in June 1933.

Location shooting took place at the Hasson station beyond the , using the largest locomotive in the west, leased from the ; and at the Iverson Ranch in .

During filming, Sturges acted as the dialogue director, working with the actors much as he had done in stage rehearsals as a playwright. [IBDB [http://ibdb.com/person.asp?ID=8190 Preston Sturges] ]

The film was previewed in Los Angeles on fy|1933, and after objections from the about the sexual nature of the relationship between a stepmother ("Sally Garner") and her stepson ("Tom Garner Jr."), some re-editing was done. When this did not satisfy the censors, reshooting and more extensive re-editing was done to alleviate their concerns. The film was premiered in on fy|1933, and was generally released on of that year. Fox coined the word "narratage" to describe the non-chronological narration of the story.clr

Although the film was well received by critics, and Spencer Tracy's performance was especially praised, the film did not do well at the box office, except in New York City. By the end of 1940, it had grossed a little over a half-million dollars, which meant that Sturges had only received about $2000 over his advance. By 1957 it had grossed around a million.

Sturges' screenplay was widely praised. It was published in book form in 1934, and he received the 1933 "Hollywood Reporter" Award of Merit for Best Original Story.