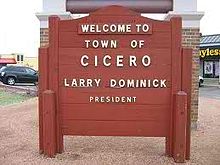 Cicero is an incorporated town in Cook County, Illinois, United States. The population was 83,891 at the 2010 census. Cicero is named for the town of Cicero, New York, which in turn was named for Marcus Tullius Cicero, the Roman statesman and orator.

Originally, Cicero Township occupied six times its current territory. Weak political leadership and town services resulted in cities such as Oak Park and Berwyn voting to split off from Cicero, and other portions such as Austin were annexed into the city of Chicago [1].

Al Capone built his criminal empire in Chicago before moving to Cicero to escape the reach of Chicago police.[2] The 1980s and 1990s saw a heavy influx of Hispanic (mostly Mexican and Central American) residents to Cicero. Once considered mainly a Czech or Bohemian town on 22nd Street (now Cermak Road), most of the European-style restaurants and shops have been replaced by Spanish-titled businesses.Cicero also has seen a revival in its commercial sector, with many brand-new mini-malls and large retail stores. New condominiums are also being built in Cicero.

Cicero has long had a reputation of government scandal. Most recently, Town President Betty Loren-Maltese was sent to federal prison for misappropriating funds [2]. She was well liked by retired, long-term Cicero residents, but was continually challenged by younger Hispanic opponents before her indictment.[citation needed]

Cicero was taken up and abandoned several times as site for a civil rights march in the mid-1960s. The American Friends Service Committee, the Rev. Martin Luther King, and many affiliated organizations, including churches, were conducting marches against housing and school de facto segregation and inequality in Chicago and several suburbs, but the leaders feared too violent a response in Chicago Lawn and Cicero. Eventually, a substantial march (met by catcalls, flying bottles and bricks) was conducted in Chicago Lawn, but only a splinter group, led by Rev. Jesse Jackson, marched in Cicero.[3]

According to the United States Census Bureau, the town has a total area of 5.8 square miles (15 km2), all land.

Cicero used to run from Harlem Avenue to Western Avenue and Pershing Road to North Avenue; however, much of this area was annexed by Chicago.

On the south side of Cicero, there were two racetracks. Hawthorne Race Course, located in Cicero and Stickney, is a horse racing track still in operation. Just north of it was Chicago Motor Speedway at Sportsman's Park, which was formerly Sportsman's Park Racetrack (for horse racing) for many years. This Sportsman's Park facility is now closed, acquired by the Town of Cicero and currently being demolished. A high-end shopping center (Fountain Square) is slated to be constructed on this site.

There were 23,115 households out of which 50.7% had children under the age of 18 living with them, 56.1% were married couples living together, 13.7% had a female householder with no husband present, and 21.7% were non-families. 17.5% of all households were made up of individuals and 8.1% had someone living alone who was 65 years of age or older. The average household size was 3.70 and the average family size was 4.18.

This median income may be influenced by the fact that Cicero is a factory town. As of 1999, about a quarter of the city contained one of the greatest industrial concentrations in the world. There were more than 150 factories in 1.75 miles. Communications and electronic equipment, printing presses, steel castings, tool and die makers' supplies, forging and rubber goods.

Most of Cicero is in Illinois' 4th congressional district; the area south of the railroad at approximately 33rd Street is in the 3rd district.[7]

From 1927 until 1972, Cicero was also the home of Timothy Christian School. This caused a great deal of racial unrest in the city in the 1960s.[citation needed]

In addition to grade schools, Cicero is also home to Morton College.

One of many "No Gangs" signs in Cicero.

Cicero had a few homegrown street gangs such as 12 Street Players, Noble Knights, and Arch Dukes. However, these original gangs began to fade away as Hispanics moved in the town, some bringing with them gang members from the city of Chicago. Gang members from Chicago then created their own chapters of their gang within the town. During the 90's, Cicero's gang problem was huge, which then the town had about 17 to 20 gangs. Gang activity has decreased over the years along with the town's homicide rate which are mostly gang related.