Development of the reproductive system

Development of the reproductive system

The reproductive organs are developed from the intermediate mesoderm. The permanent organs of the adult are preceded by a set of structures which are purely embryonic, and which with the exception of the ducts disappear almost entirely before the end of fetal life. These embryonic structures are the Wolffian and Müllerian ducts, also known as mesonephric and paramesonephric ducts, respectively. The Wolffian duct remains as the duct in males, and the Müllerian as that of the female.

The Wolffian duct originates from a part of the pronephric duct.

In the outer part of the intermediate mesoderm, immediately under the ectoderm, in the region from the fifth cervical segment to the third thoracic segment, a series of short evaginations from each segment grows dorsally and extends caudally, fusing successively from before backward to form the pronephric duct. This continues to grow caudalward until it opens into the ventral part of the cloaca; beyond the pronephros it is termed the Wolffian duct. Thus, the Wolffian duct is what remains of the pronephric duct after the atrophy of the pronephros.

In the male the Wolffian duct persists, and forms the tube of the epididymis, the ductus deferens and the ejaculatory duct, while the seminal vesicle arises during the third month as a lateral diverticulum from its hinder end. A large part of the head end of the mesonephros atrophies and disappears; of the remainder the anterior tubules form the efferent ducts of the testis; while the posterior tubules are represented by the ductuli aberrantes, and by the paradidymis, which is sometimes found in front of the spermatic cord above the head of the epididymis.

In the female the Wolffian bodies and ducts atrophy. The nonfunctional remains of the Wolffian tubules are represented by the epoophoron, and the paroöphoron, two small collections of rudimentary blind tubules which are situated in the mesosalpinx. 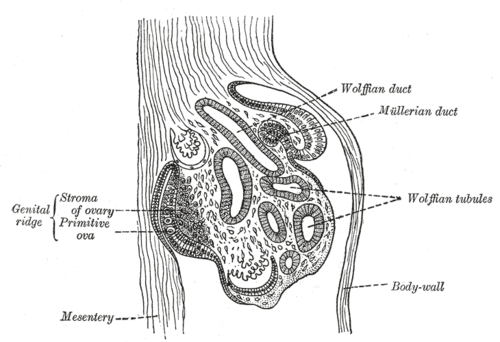 Section of the fold in the mesonephros of a chick embryo of the fourth day.

The lower part of the Wolffian duct disappears, while the upper part persists as the longitudinal duct of the epoöphoron, called Gartner's duct.

There are also developments of other tissues from the Wolffian duct that persist, e.g. the development of the suspensory ligament of the ovary.

A.—Diagram of the primitive urogenital organs in the embryo previous to sexual distinction. The common genital cord is labeled with gc.
* 3. Ureter.
* 4. Urinary bladder.
* 5. Urachus.
* cl. Cloaca.
* cp. Elevation which becomes clitoris or penis.
* i. Lower part of the intestine.
* ls. Fold of integument from which the labia majora or scrotum are formed.
* m, m. Right and left Müllerian ducts uniting together and running with the Wolffian ducts in gc, the common genital cord.
* ot. The gonadal ridge from which either the ovary or testis is formed.
* ug. Sinus urogenitalis.
* W. Left Wolffian body.
* w, w. Right and left Wolffian ducts.

Shortly after the formation of the Wolffian ducts a second pair of ducts is developed; these are the Müllerian ducts. Each arises on the lateral aspect of the corresponding Wolffian duct as a tubular invagination of the cells lining the abdominal cavity. The orifice of the invagination remains open, and undergoes enlargement and modification to form the abdominal ostium of the fallopian tube. The ducts pass backward lateral to the Wolffian ducts, but toward the posterior end of the embryo they cross to the medial side of these ducts, and thus come to lie side by side between and behind the latter—the four ducts forming what is termed the common genital cord, to distinguish it from the genital cords of the germinal epithelium seen later in this article. The Müllerian ducts end in an epithelial elevation, the Müllerian eminence, on the ventral part of the cloaca between the orifices of the Wolffian ducts. At a later stage the eminence opens in the middle, connecting the Müllerian ducts with the cloaca.

In the male the Müllerian ducts atrophy, but traces of their anterior ends are represented by the appendices testis (hydatids of Morgagni of the male), while their terminal fused portions form the utriculus in the floor of the prostatic urethra. This is due to the production of Anti-Müllerian hormone by the Sertoli cells of the testes.

In the female the Müllerian ducts persist and undergo further development. The portions which lie in the genital cord fuse to form the uterus and vagina. This fusion of the Müllerian ducts begins in the third month, and the septum formed by their fused medial walls disappears from below upward.

The parts outside this cord remain separate, and each forms the corresponding Fallopian tube. The ostium of the fallopian tube remains from the anterior extremity of the original tubular invagination from the abdominal cavity.

About the fifth month a ring-like constriction marks the position of the cervix of the uterus, and after the sixth month the walls of the uterus begin to thicken. For a time the vagina is represented by a solid rod of epithelial cells. A ring-like outgrowth of this epithelium occurs at the lower end of the uterus and marks the future vaginal fornix. At about the fifth or sixth month the lumen of the vagina is produced by the breaking down of the central cells of the epithelium. The hymen represents the remains of the Müllerian eminence [1].

Main article: Development of the gonads

The gonads are the precursors of the testes in males and ovaries in females. They initially develop from the mesothelial layer of the peritoneum.

The ovary is differentiated into a central part, the medulla of ovary, covered by a surface layer, the germinal epithelium. The immature ova originate from cells from the dorsal endoderm of the yolk sac. Once they have reached the gonadal ridge they are called oogonia. Development proceeds and the oogonia become fully surrounded by a layer of connective tissue cells (pre-granulosa cells) In this way, the rudiments of the ovarian follicles are formed. The embryological origin of granulosa cells, on the other hand, remains controversial. Just as in the male, there is a gubernaculum in the female, which pulls it downward, albeit not as much as in males. The gubernaculum later becomes the proper ovarian ligament and the round ligament of the uterus.

In short, the descent of the testes consists of the opening of a connection from the testis to its final location at the anterior abdominal wall, followed by the development of the gubernaculum, which subsequently pulls and translocates the testis down into the developing scrotum. Ultimately, the passageway closes behind the testis. A failure in this process can cause indirect inguinal hernia or an infantile hydrocoele. 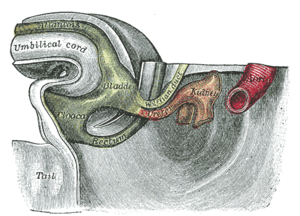 The definitive urogenital sinus consists of a caudal cephallic portion and an intermediate narrow channel, the pelvic portion.

The vesico-urethral portion is the deepest portion, continuous with the allantois. It absorbs the ends of the Wolffian ducts and the associated ends of the renal diverticula, and these give rise to the trigone of urinary bladder and part of the prostatic urethra. The remainder of the vesico-urethral portion forms the body of the bladder and part of the prostatic urethra; its apex is prolonged to the umbilicus as a narrow canal, the urachus, which later is obliterated and becomes the median umbilical ligament of the adult.

The prostate originally consists of two separate portions, each of which arises as a series of diverticular buds from the epithelial lining of the urogenital sinus and vesico-urethral part of the cloaca, between the third and fourth months. These buds become tubular, and form the glandular substance of the two lobes, which ultimately meet and fuse behind the urethra and also extend on to its ventral aspect. The median lobe of the prostate is formed as an extension of the lateral lobes between the common ejaculatory ducts and the bladder.

Skene's glands in the female urethra are regarded as the homologues of the prostatic glands.

The bulbourethral glands in the male, and Bartholin's gland in the female, also arise as diverticula from the epithelial lining of the urogenital sinus. 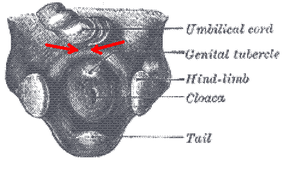 The mesoderm extends to the midventral line

Until about the ninth week of gestational age[3] the external genitalia of males and females look the same, and follow a common development. This includes the development of a genital tubercle and a membrane dorsally to it, covering the developing urogenital opening, and the development of labioscrotal folds.

Even after differentiation can be seen between the sexes, some stages are common, e.g. the disappearing of the membrane. On the other hand, sex-dependent development include further protrusion of the genital tubercle in the male to form the penis. Furthermore, the labioscrotal folds evolve into the scrotum in males, while they evolve into labia in females.

Mesoderm extends to the midventral line for some distance behind the umbilical cord, and forms the lower part of the abdominal wall; it ends below in a prominent swelling, the cloacal tubercle, which after the separation of the rectum becomes the genital tubercle. Dorsally to this tubercle the sides aren't really fused. Rather, the urogenital part of the cloacal membrane separates the ingrowing sheets of mesoderm.

The genital tubercle develops into the phallus, the first rudiment of the penis or clitoris.

The terminal part of the phallus, representing the future glans becomes solid. The remainder of the phallus, which remains hollow, is converted into a longitudinal groove by the absorption of the urogenital membrane.

The term genital tubercle, however, still remains, but only refers to the future glans [3] 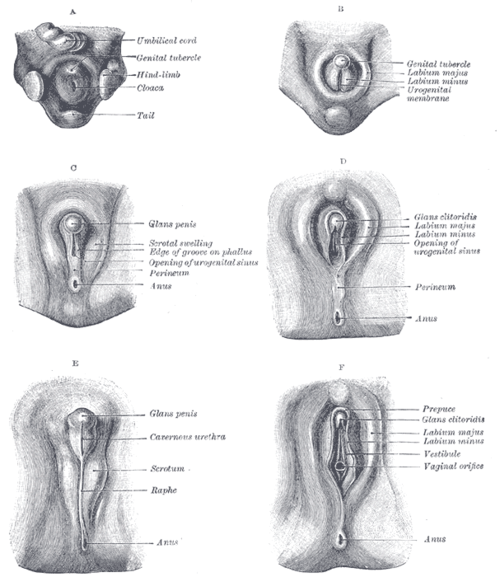 The following developments occur in both males and females, although a difference in the development between the sexes already can be seen:

In the female, a deep groove forms around the phallus. The sides of it grow dorsalward as the labioscrotal folds, which ultimately form the labia majora in females. The labia minora, in contrast, arise by the continued growth of the lips of the groove on the under surface of the phallus; the remainder of the phallus forms the clitoris. The immature glans becomes the clitoral glans.

In the male the pelvic portion of the cloaca undergoes much greater development, pushing before it the phallic portion.

The labioscrotal folds extend around between the pelvic portion and the anus, and form a scrotal area. During the changes associated with the descent of the testes this scrotal area is drawn out to form the scrotal sacs. The penis is developed from the phallus.

As in the female, the urogenital membrane undergoes absorption, forming a channel on the under surface of the phallus; this channel extends only as far forward as the corona glandis.

In the male, by the greater growth of the pelvic portion of the cloaca, a longer urethra is formed, and the primitive opening is carried forward with the phallus, but it still ends at the corona glandis. Later, this opening, which is located on the dorsal ide of the penis[4], closes from behind forward. Meanwhile, the urethral plate of the glans breaks down centrally to form a median groove continuous with the primitive ostium. This groove also closes from behind forward, leaving only a small pipe running in the middle of the penis. Thus, the urogenital opening is shifted forward to the end of the glans.

Diagrams to show the development of male and female generative organs from a common type.

A.—Diagram of the primitive urogenital organs in the embryo previous to sexual distinction.

B.—Diagram of the female type of sexual organs.

C.—Diagram of the male type of sexual organs.