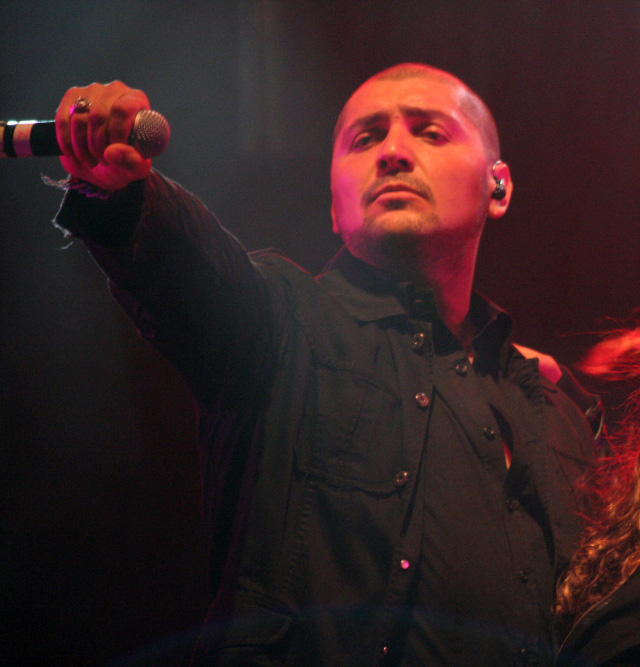 Reyli Barba (born , in Juarez, ), most commonly known as Reyli, is a well-known singer who has reached staggering success in the last years all over and the latin . He is also a successful composer and has written songs for the likes of .

Reyli is a former member of "Elefante", a band which he led until 2003, when he set out to release his debut solo album. This album, titled "En La Luna" (In the Moon), sold well, and "Amor Del Bueno" reached the top of the Mexican charts, charted in the U.S. and became a global latin hit.

In 2007, the singer released his second album, "Fe" (Faith), which has failed to sell as well as his prior album. Both singles from this album have also failed to make the impact other of his singles have made.

Elefante had formed in in the late nineties, but they only became successful in the early 2000s, when they opened for in the , Mexico's most important arena. Their debut album, "Lo Que Andabamos Buscando", spawned their greatest hit, "El Abandonado" which was sung by Reyli. During this time, the band would represent in the famous festival Viña del Mar.

The band would go on to release "El Que Busca Encuentra", their second album in 2001. The first single was "Asi Es La Vida" which reached the Mexican Top 5 due to its staggering radio airplay.

In 2003, Reyli announced that he had plans to release a solo album, and that he was to stay in Elefante. After the announcement, however, he left the band. No announcement was ever given to the media.

After leaving the band, Reyli started composing for what he planned to be his solo debut, a romantic pop much different than the Rock Latino he sung in Elefante. "En La Luna" was released on , .

The first single from the album was "Desde Que Llegaste" which was used in the soundtrack for the movie Ladies' Night. Radio airplay and the high rotation of the music video, which featured now- actress , helped the single climb up the charts. Ten weeks after its release, the song had climbed to the top of the Mexican charts and stayed there for a second week. The single also charted in the U.S. "Latin Top 30".

The second single from the album, "Al Fin Me Arme de Valor" was largely a flop. The song failed to chart on the U.S. and only reached the "Mexican Top 20".

On October of 2005, Reyli released "Amor del Bueno", which was to be the defining third single. The song was welcomed warmly by radio stations, which put the song on high rotation. By the end of the year, the song had climbed to the number 1 spot in the and had dethroned ' "Nada Valgo Sin Tu Amor". The song went on to spend 8 weeks at number one, and became the year's second most successful single, only behind 's "". The song would spend 15 other weeks in the Mexican Top 20 and also charted as high as 11 in the U.S. and at 2 in the Latin American Top 40.

During this time, Reyli's "La Descarada" was also the theme song for the extremely successful telenovela Rubi, which was shown in Mexico, the United States and all over Latin America.

Two more songs were released from the album, "No Era Necesario", which peaked within the Mexican Top 20 and "Se Quien Soy" which was the official song to the version of Big Brother.

In mid-2007, Reyli released his expected second album, "Fe" (Faith). The album flopped in sales. Whereas Reyli's last album debuted at number one, "Fe" debuted within the Top 20 and has only peaked at 11. He recorded a song called "Aunque vivas con el" with the mexican legend , for Jose's last album "Mis Duetos".

Reyli has released 2 singles from the album to date. "Pegale A La Pared", the first single, was expected to reach the success of "Amor del Bueno" but peaked at an astonishingly low 42. "Perdoname En Silencio", the second single, has had a better run. In mid July, it debuted in the chart at 33 and has peaked at 16 in the .