Oregon Judicial Department
Not to be confused with Oregon Department of Justice.

Oregon’s 1981 Legislature enacted legislation that unified the state courts into the Oregon Judicial Department. The district, circuit, tax, and both appellate courts were combined beginning in 1983. In 1997, the Legislature then combined the district and circuit courts, and in 1998 added a Magistrate Division to the Tax Court.[3] 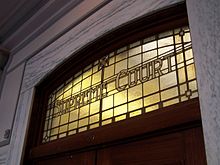 Stained glass above the courtroom entrance

Oregon’s highest state court is the Oregon Supreme Court. The court has seven justices elected statewide to six-year terms.[4] These justices then elect one member to serve a six-year term as Chief Justice. The court hears appeals from the lower state courts, as well as some unique issues such as electoral districting and ballot measure titling. Appeals from the court’s decisions can only go to the United States Supreme Court.[4]

The Oregon Court of Appeals is the state intermediate appellate court in Oregon.[4] With some exceptions, it has jurisdiction to hear all civil and criminal appeals from circuit courts, and to review actions of most state administrative agencies. The court consists of ten judges elected state-wide in nonpartisan elections to six-year terms. Their administrative head is a Chief Judge appointed by the Chief Justice of the state Supreme Court.[4]

Oregon’s Tax Court has a Magistrate and Regular divisions, with the Magistrate Division consisting of magistrate judges handling cases at the trial level[5] The Regular Division hears appeals from the Magistrate Division. The Tax Court’s jurisdiction includes exclusive jurisdiction regarding facts and legal questions arising from all tax laws within the state of Oregon.[5] An elected Tax Judge serves as the head of the court.

In 1998, the state combined its state District Courts into the Oregon Circuit Courts. These courts are divided into 27 judicial districts across the entire state.[6] The courts are trial level courts with general jurisdiction. Except in six Eastern Oregon counties, the courts have jurisdiction over probate issues, adoptions, guardianship and conservatorships, and juvenile items.

The department’s chief operating officer is the State Court Administrator. Housed in the Oregon Supreme Court Building, their role is to assist the Chief Justice of the Supreme Court in supervising and administrating the state courts. Created in 1971, the office also is responsible for keeping a current list of attorneys allowed to practice in the state and coordinating with the Bar for new lawyer admissions.[7]

Other divisions operated by the department include indigent defense, the state bar and rule and procedure making bodies. Oregon’s Public Defense Services Commission provides indigent legal counsel for defendants in Oregon’s court system, including civil and criminal proceedings.[8] The Oregon State Bar regulates practicing attorneys in the state including disciplinary matters.[4] The Council on Court Procedures revises the court rules, and the Commission on Judicial Fitness and Disability investigates complaints made against judges.[4]